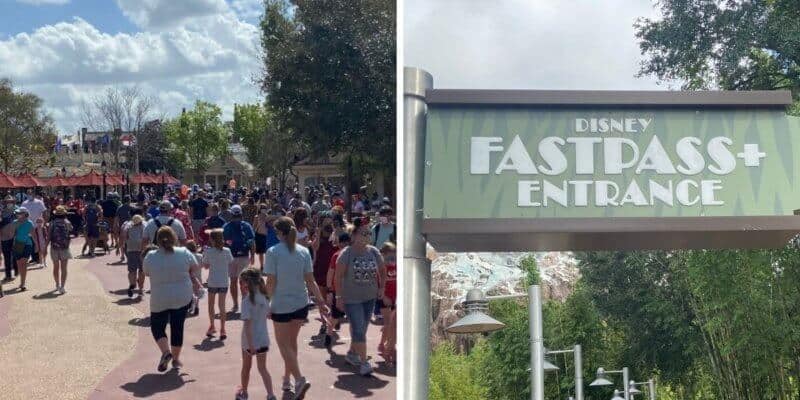 When the theme parks at Walt Disney World Resort first opened in July 2020, there were several health and safety protocols put in place. These include the requirement of wearing a proper face covering, increased hand sanitizing stations, social distancing, and operating at a limited capacity.

In case you weren’t aware, the limited capacity that was put into place originally stood at 25%. However, in November 2020, Disney CEO Bob Chapek announced that Walt Disney World Resort had increased its capacity for the theme parks to a 35% capacity limit.

And just yesterday, on The Walt Disney Company’s Q2 earnings call, CEO Bob Chapek confirmed that the theme parks have already started increasing capacity once again, which you can read more about here. At this time, we do not know exactly what percentage of capacity Disney World is operating at, but we know it is higher than 35%.

With Walt Disney World continuing to increase capacity, I, personally, think it is time for other amenities to return — including FastPass+ — as well as for Disney to open up additional dining locations.

It’s time to bring back FastPass+

If Disney World brings in more and more Guests on a daily basis, they need to consider some other things. For one, even though Disney is going to begin reducing physical distancing in certain areas in a phased approach, it will still be in place in one form or another. With this being said, lines for attractions, merchandise, and other areas throughout the park could extend even further than they are now (of course, depending on what the new social distancing measures will look like) as more Guests are allowed into the theme parks.

Regardless, we know some sort of physical distancing will be in place for the time being, meaning Guests will still need to be spread out. If lines extend into walkways (just as they are now) it will make other parts of the theme park feel crowded.

Additionally, the wait times for attractions will continue to grow. With more Guests inside the park, it means more Guests wanting to ride attractions, resulting in longer wait times. One solution to prevent aggravated Guests is to bring back FastPass+.

FastPass+ allowed Guests to select certain attractions that they wanted to bypass the line for. They would choose an attraction and a time frame, which would then be linked to their My Disney Experience account. Once it was their time to ride, they would go to the attraction queue, scan their MagicBand or ticket/Annual Pass, and bypass the line. This not only allowed Guests to experience other things in the theme park but also helped to eliminate more Guests standing in the physical line.

Another thing I think Disney needs to consider is opening up more restaurants. There are still several dining locations closed to Guests and with more and more people coming into the theme parks, it means the locations that are open will become more crowded.

The quick-service locations get a bit crowded now, so imagine as Disney continues to increase capacity and allow more Guests in the park what dining at a quick-service location will be like during peak meal times. If more dining locations open, it will help spread out Guests across the theme park and keep everyone from piling into the only options currently available.

In case you missed it, the Walt Disney Company had to make the difficult decision to lay off tens of thousands of Cast Members across Disney Parks and Resorts in the United States — including a majority of the entertainment cast at the theme parks.

Not long after the entertainment layoff notices went out last October, Disney released a statement saying that they will, in fact, bring back entertainment when the time is right. Since then, Disney has kept their promise, and we have seen the Frozen Sing-Along Celebration, as well as A Celebration of Festival of The Lion King, return to the theme parks. But now, I think it’s time to bring back even more offerings.

By bringing back more shows, it will help spread out more Guests within the theme park, helping with crowd control and allowing Disney to safely increase capacity.

Bringing back shows and opening more dining locations will not only help Disney safely increase capacity, but it will also bring back more Cast Members.

We know that Walt Disney World is working hard to bring Cast Members — in fact, just yesterday, Disney CEO Bob Chapek stated that 80% of Cast Members have returned to work already! While this is great news, it would be great to see even more Cast Members return to work — and this can happen if the theme parks and Disney Resort hotels open up more dining locations and bring back more shows.

All in all, I personally feel as though if Disney World is going to continue increasing its limited capacity, we also need to see some other things come back and open up — including FastPass+, dining locations, and shows.

What do you think? If Disney World continues increasing capacity,should they start bringing back amenities like FastPass+ and opening more dining locations? Let us know in the comments below.