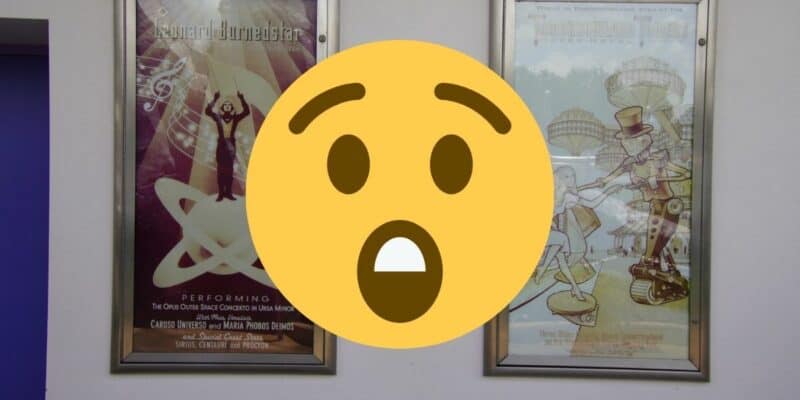 We have already seen Cinderella Castle undergo a makeover in honor of Walt Disney’s Cinderella (1950) celebrating 70 years, as well as receive additional embellishments for the 50th anniversary specifically.

Additionally, Disney Imagineers already began working on attractions including Prince Charming Regal Carrousel, Peter Pan’s Flight, Dumbo the Flying Elephant, and others, so they are in tip-top shape for the 50th. And we can’t forget about the Tangled area of Magic Kingdom and how it recently received some tender loving care as well, which you can read more about here.

Although many improvements have been made inside Tomorrowland, the iconic posters that sit in the Main Street Train Station look a bit dismal.

bioreconstruct shared some photos of the posters in the Main Street Train Station, some of which look really run down and old. Per their Tweet:

Interesting how one side of the Tomorrowland entrance from the castle hub has colorful posters, and the other side has heavily faded posters.

Interesting how one side of the Tomorrowland entrance from the castle hub has colorful posters, and the other side has heavily faded posters. pic.twitter.com/MhwC8hA3Kk

As Disney continues to update other areas of the theme parks, we hope to see new Tomorrowland posters arrive soon, but Disney has not confirmed if they will be replacing the posters. Inside the Magic will update you as we get information.

Do you hope to see Disney replace the Tomorrowland posters in the Main Street Train Station? Let us know in the comments below