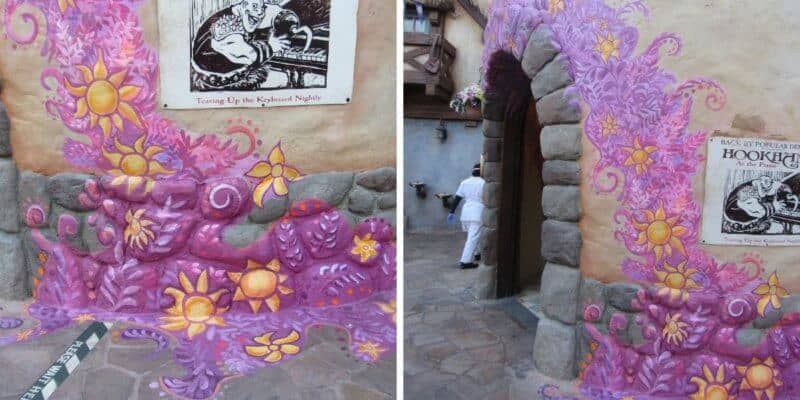 Walt Disney World is getting its theme parks ready for the 50th anniversary as they give Cinderella Castle a makeover, repaint some of the attractions in Fantasyland, debut a new lighting package at Spaceship Earth, and more!

Now, one very beloved area of Magic Kingdom is also getting some tender, love, and care, most likely in preparation for Disney World’s 50th anniversary!

The famous Tangled restroom area in Fantasyland at Magic Kingdom has recently received some fresh new paint! As you can see in the photo above, which was taken before the new paint job, the mural is a bit dull — Most likely due to the hot Florida sun beating down on it day after day.

But now, it looks like Rapunzel may have paid a visit to the theme park as the beautiful flower mural is much more vibrant and bold than it was in the past, as you can see in the photos below which were taken on a recent trip to the theme park.

But this floral mural wasn’t the only thing to get new paint as the beautiful scrollwork on the wooden framing also received some updates as the paint is now brighter and bolder. Check out the photos below to see for yourself!

Although this may not be the addition many were hoping for (fans have been saying for years that Rapunzel deserves more than bathrooms at Disney World) it is nice to see Disney giving this area of the theme park some love and repainting the mural so it is vibrant and bright once again.

At this time, we are unsure if Disney plans to spruce up other aspects of this area, but we would love to see new flowers planted or even the repainting of other areas including the hidden pascals! Inside the Magic will continue to update you as we see any other additions around Disney World.

If you are looking for more Tangled in the Disney Parks, we recently reported that a new area will be featured in Tokyo DisneySea as part of the Fantasy Springs expansion (as seen in the photo below), which has several fans excited. Additionally, a Tangled quick-service restaurant is located inside Shanghai Disneyland and Rapunzel’s tower is at Disneyland Park in Disneyland Resort.

Are you excited to see Disney spruce up the Tangled area in Disney World? Let us know in the comments below.

If you want to visit Disney World for the 50th anniversary, which begins later this year and will last for 18 months, start planning your trip today with the help of our friends over at Academy Travel!