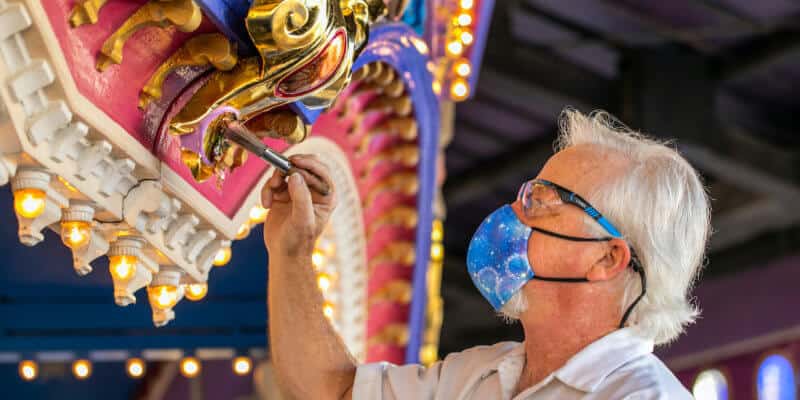 Disney has just announced that both Main Street and Fantasyland at Magic Kingdom will be receiving enhancements ahead of the 50th anniversary celebration of Walt Disney World.

What are the changes being made, and will they affect your upcoming Disney World visit?

Recently, we reported that the Main Street Confectionery would be closed for an extended refurbishment. Now. we know why!

Disney has announced that changes are coming to the Main Street Confectionery and other shops on Main Street:

Main Street Confectionery and The Chapeau will close for refurbishment later this month. Along with that, some of the merchandise and goodies will be shifting to other spots in the park. Now don’t worry, you’ll still have plenty of options to satisfy your sweet tooth once work to transform the locations kicks off on March 29. Many of the treats from Main Street Confectionery will be available at Emporium and Main Street Cinema during the closure. And have no worries about where to find your favorite Disney hats, including the must-have Mickey Mouse ears. Those will be just across the street at Box Office Gifts, at the Town Square Theater. Finally, if you’re looking for collectibles and artwork, Bonjour! Village Gifts will be the new go-to spot.

Lots of changes coming to Main Street so do not be surprised when you visit Walt Disney World if some of your favorite items have shifted.

Disney also stated that Fantasyland is getting a beautiful new paint job to better reflect the EARidescnce of the 50th Anniversary of Walt Disney World. We have reported on the signage of attractions such as Peter Pan being removed recently. Disney says gold leaf accents will be added to the attractions for extra sparkle!

Here are the details that Disney provided today:

Outside of the world of merchandise, you may have noticed some other updates taking place around the park recently. Whether it be a freshly painted castle turret being adorned with 50th anniversary décor, or shimmering gold leaf being added to your favorite Fantasyland attractions, our cast members are hard at work making Magic Kingdom Park shine like never before. Be sure to keep an eye out for these enhancements and more in the coming months!

How will this affect your visit to Walt Disney World?

At the moment, it does not look like any of the Fantasyland attractions are going to be closed for refurbishment as the magical gold enhancements are added to their exteriors, so you will only see light refurbishment work taking place and this shouldn’t impact your vacation at Magic Kingdom. When it comes to the Main Street Confectionery and The Chapeau closing temporarily, Disney mentioned above that you can still get many of those delicious treats at Emporium and Main Street Cinema, and hats are available at Box Office Gifts.

Don’t worry — your visit to the Magic Kingdom will still be magical even while Disney is pixie dusting the place.

What other improvements are being made for the 50th anniversary?

Disney is making other improvements ahead of the 50th anniversary. Decorations are being added to Cinderella Castle at Magic Kingdom, and new lighting is also being added to Spaceship Earth over in EPCOT.

Tower of Terror over at Disney’s Hollywood Studios and The Tree of Life at Disney’s Animal Kingdom will also receive special lighting that reflects the same EARidecence color scheme at Magic Kingdom and EPCOT.

Disney is also updating the entrance signage that greets Guests as they drive into the resort.

The toll booth for parking at Magic Kingdom also received a royal makeover, and now sport the new EARidescent colors!

We cannot wait to see when all of the improvements are completed!

Are you excited for the upcoming improvements to be made around Magic Kingdom? Let us know in the comments!

We can help you book a magical vacation for the 50th anniversary of Walt Disney World –– click here for more information.

Comments Off on Fantasyland, Main Street Get Magical New Look For 50th Anniversary