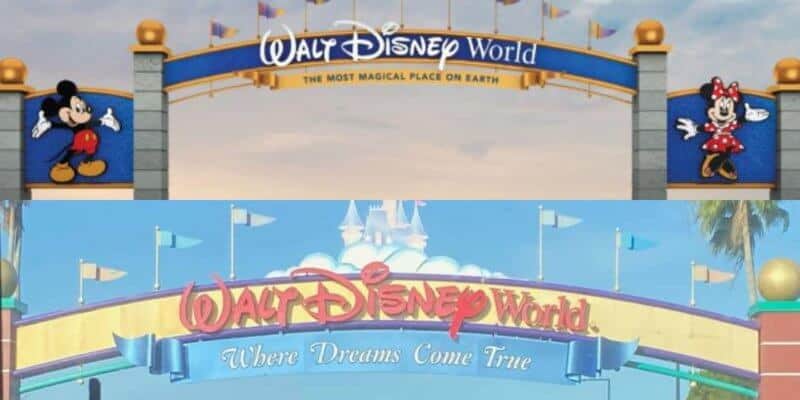 Although the Walt Disney World entrance sign is set to undergo a royal transformation, not all signs have begun work just yet.

We recently discovered and saw renderings of what the new Disney World entry archway was going to look like. It seems that the trend of a regal blue paint color that we have seen on the Cinderella Castle and the Magic Kingdom Toll Plaza will continue are replace the current red and yellow design.

Many Guests and Disney fans have been focused on the sign on the Western Way entrance that has currently begun its refurbishment, but what we aren’t talking about is the fact that there are multiple Disney World entry points, many with the famous archway.

Inside the Magic Senior Reporter, Kelly Coffey rode Disney’s Magical Express onto the property, and it seems that the entryway for the Magical Express is still untouched. Osceola and Epcot Center Dr. are two very popular entry points for Disney World, and neither has been touched as of yet.

If you are entering Disney World, you actually have 8 options, but not all will have the classic Disney World archway. They are:

Western Way is actually the least used entry point that has an archway at Disney World, which could possibly explain why Disney began the refurbishment with that entry point. Although no official reason has been released. It will be interesting to see if the signs still emote that same magical energy that the current ones do. But if we compare what the end result of the Magic Kingdom Toll Plaza is looking like, we are likely going to be very satisfied!

Related: Will Disney World’s TTC Be The Next Blue and Pink Update?

Wish you were crossing under that classic Disney World archway right now? Book a Disney vacation today! Click here to get started on your magical trip.