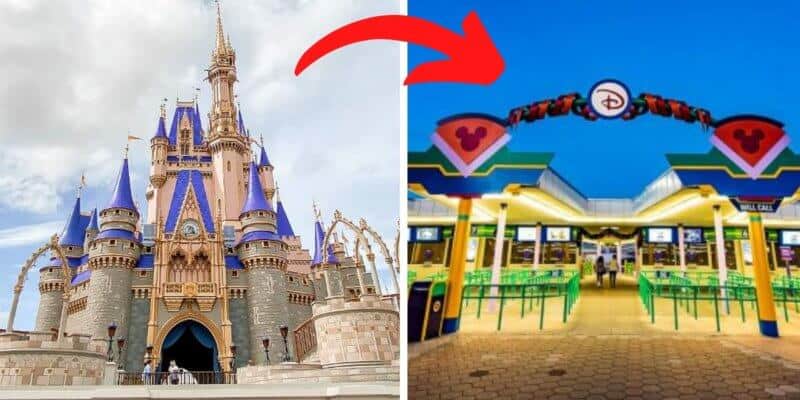 Considering Magic Kingdom’s Cinderella Castle, the Magic Kingdom Toll Plaza marquee, and the Disney World entrance sign are all being or have been refurbished to fit into the same color scheme, will the Ticket and Transportation Center be next?

Before we get started, let’s get it out in the open that this has not been disclosed or discussed by Disney. However, it does make a lot of sense. After we saw Cinderella Castle at Magic Kingdom get it’s makeover — officially for the 70th Anniversary of Walt Disney’s Cinderella (1950), but also ahead of Disney World’s 50th Anniversary Celebration in 2021 — it seemed that a royal blue and pink were going to be the predominant colors for the park.

Flash forward to now, when we can see that the Magic Kingdom Toll Plaza marquee is being painted to a royal blue with rose gold shimmering accents, just like the castle, as well as the entrance sign to Disney World being slated to take a bath in that same royal blue paint. The color makes sense, it’s very regal and astute — perfect for The Most Magical Celebration on Earth next year – but, there is one member of the signage family that is sticking out like a sore thumb.

Disney’s Ticket and Transportation Center AKA the TTC.

Let’s face it the TTC is the stop right before you get to enter the Magic Kingdom, and that place entered in the early ’90’s and never left. It does have fun colors going on, but it looks very dated at this point. Plus, mirroring the other signage updates we have seen, these colors do not fit well. Considering every other sign that is associated with Magic Kingdom has been, or is being, transformed into the royal blue and rose gold color scheme, it would not be surprising if Disney World made the TTC match.

Plus, if we look at the ribbon-like swirls on the marquee, we can see that that matches the same design that we see on the Magic Kingdom Ticket Toll Plaza marquee, associating them stylistically. This does not mean that they need to be the same colors, but it would make sense.

And, while we are imagining this new and improved Ticket and Transportation Center, perhaps Disney will also update the monorail, ferry, and parking lots signs for the 50th Anniversary!

Currently, the Magic Kingdom monorail and ferry signs match the TTC aesthetic with the deep purple, green, and yellow tones. If Disney were to update the ticket booths, it would look odd to leave these signs as is.

Finally, if Disney really wanted to make sure everything was unified, then the parking lot signs would have to change too, since they match the early 1990’s aesthetic that the TTC exudes.

It’s also interesting to think, if Disney were to change the parking signs, would they upgrade the characters on it as well? Currently, when you park at the Magic Kingdom you are either on the Villains or Heroes side, with classic characters such as Woody, Aladdin, Peter Pan, Simba, Mulan and Rapunzel (Heroes lot), and Zurg, Jafar, Hook, Scar, Cruella and Ursula (Villains lot).

It would be a cool surprise if for the 50th if Disney World renamed each of these characters to more contemporary characters from recent Disney films. All of us at ITM were bouncing around some prospects, for Villains we thought of Dr. Facilier and Mother Gothel, and for Heroes, Moana/Maui, Baymax, Anna, Elsa, Tiana – the list can go on and on! With so many new films, it would make sense to see Disney update their park signage to match their content, especially considering the priority they are placing on Disney+ nowadays.

Related: OpEd: Disney Should Stop Spending and Bring Back the 28,000 Cast Members Instead

Do I think these changes will happen?

Again, Disney has not stated any updates for the TTC, but I think it would be a mistake to not include them, and my gut tells me that we will be hearing of an announcement for some new paint soon. Considering everything else is changing to fit the new colors, it only feels right that the TTC would join and not break the flow that Guests would receive moving from the Disney World sign, through to the Toll Plaza, and then ending in front of Cinderella Castle. If the TTC is not in-sync, then that chain is broken.

For now, we will just have to wait and see if our predictions come true. If you want to be in the know, sign up for our newsletter below and you will get all the Disney details daily!

Do you think Disney’s Ticket and Transportation Center needs a makeover?

Comments Off on Will Disney World’s TTC Be The Next Blue and Pink Update?