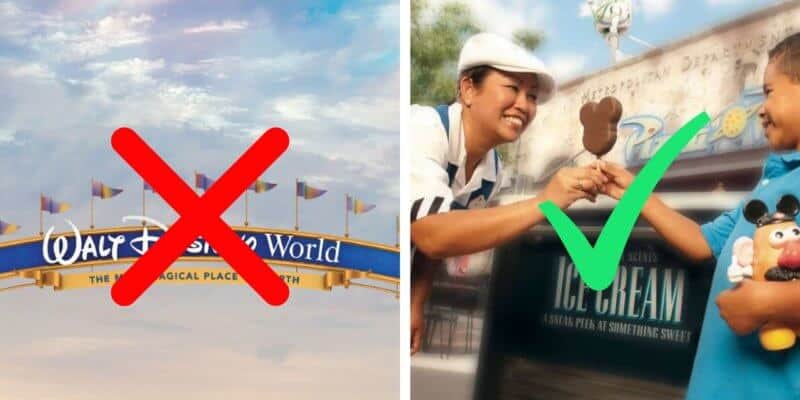 And there was just something about hearing layoff announcements alongside Disney spending money on new entry way signs that did not sit well with me.

Disney has had to lay off 28,000 CM’s due to the ongoing pandemic coast to coast effecting 10,000 Disneyland Cast Members, and 18,000 Disney World Cast Members. From entertainment, to merchandise, to food and beverage and more, Disney Cast Members are losing and have lost their jobs because, as Disney Parks Chairman Josh D’Amaro stated:

“As heartbreaking as it is to take this action, this is the only feasible option we have in light of the prolonged impact of COVID-19 on our business, including limited capacity due to physical distancing requirements and the continued uncertainty regarding the duration of the pandemic.”

Although the reason for entertainment and performer cuts at Disney World have been made for safety reasons (shows cause crowds to gather, which of course is difficult during these times), the majority of Cast Members in the 28,000 were not performers. And that is because these layoffs have a lot more to do with money.

It’s about the money

Disney has taken a major financial loss when it comes to their theme park division due to the pandemic. With Disney World operating at 25% capacity and Disneyland remaining closed for what has now been almost eight months, the revenue that the company is used to bringing in has come to a halt. D’Amaro even put some blame of Governor Newsom for the layoffs due to his refusal to allow Disneyland and Disney California Adventure to reopen and the financial hit the company has taken because of that.

If there is one thing we can pull from all of this, it’s that Disney is trying to save money. Halloween decorations at Magic Kingdom were minimal this year, and Cinderella Castle will not be lit for the Christmas season, hours of operation are being heavily pushed back, and Disney is seemingly pinching their pennies after taking such a hit.

So why are we seeing major refurbishment announcements while layoffs are happening?

As a reporter for Inside the Magic, it has been weird to see the numerous articles about unions fighting for their Cast Members and major shows being cut from the parks, while also seeing that Magic Kingdom’s Toll Plaza is being re-done, and that the entrance sign to Disney World would be getting a complete overhaul.

For context, on October 26, we received notice and reported on the Walt Disney World entrance sign receiving it’s makeover; on October 27, another massive round of Disney World layoffs were issued. These updates and new additions cost money, and if you ask any true Disney fan, they will likely tell you that this is not what we want to see money spent on.

When discussing this topic with ITM’s Editor-In-Chief Bailee Abell, she hit the nail on the head with why Guests don’t want to see refurbishment announcements while we are mourning for so many Cast Members:

“As a Guest, what matters more to me isn’t how the park looks. It’s how the park feels. I care more about the livelihoods of the true magic makers than I do about cosmetic changes to parks I already love.”

In my opinion, there is likely not one Guest who enters Walt Disney World and looks at the entrance sign (to which I love and think has so much unique Disney character, but that’s a topic for another time), and thinks, “Ugh.”  That is because as the Magical Express goes under the sign, your Disney bus driver is welcoming you to Disney World and getting you excited for your vacation.

Cast Members create the magic, not the objects

I have had my Magical Express bus driver make the whole bus count down from 10 as we passed under the sign onto Disney property into the Most Magical Place on Earth, and I can tell you that it was the magic and enthusiasm he was sharing with all of us that had everyone cheering with a smile on our face. If he did not create that magical moment, that sign would have still made me happy, but I doubt that all of the strangers on that bus would have had such a large and joyful shared experience.

Disney Cast Members will always go out of their way to create magical moments with Guests, and when you come home from a day at Disneyland with a smile on your face, it might be because a Cast Member let you ride the Matterhorn Bobsleds one extra time before the park closed, or maybe Goofy took an extra couple of minutes to joke around with you, not because there were new flowers at the entryway of the theme park.

I believe the magic of Disney is in the people who operate it. Without Cast Members, Disney does not have a heart beat, and by removing 28,000 of them, you lose a lot of the vibrancy that makes up the theme parks.

So Disney, next time you plan to release a new refurbishment or project that you are working on, please think about using that money to bring back your Cast Members first. Without them, the material objects of the park just don’t hold the same magic they once did.

Although I understand that at Disney World, changes are being made to anticipate the 50th anniversary — which financially, it seems, Disney needs to be a success more than ever — I would much rather see a fully staffed Magic Kingdom then a new paint job on the Cinderella Castle.

What do you think? Should Disney stop spending money on cosmetic updates until they can bring their Cast Members back?