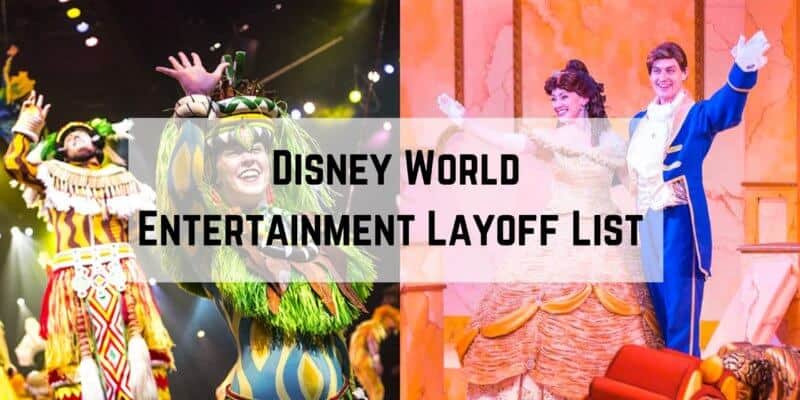 If you have been following along with us at Inside the Magic, you have likely been made aware of all the beloved entertainment cuts Disney World is facing. Just a few weeks ago, it felt like we received all of the entertainment offering cuts that we Disney lovers could handle, and then this news hit.

If you are planning to head back to the magic soon, it will be important for you to know what entertainment you can no longer expect to see at Disney World after the recent news, since many more shows and performers have been added to the list of entertainment offerings no longer available at the Walt Disney World Resort due to the COVID 19 pandemic.

Below, we are going to take a look at all of the recent cuts made to Disney World in terms of entertainment, so you can be in the know and fully prepared before your next trip.

Belle says it right in this tweet, “Christmas just won’t be the same at Hollywood Studios.” If you have been to Disney’s Hollywood Studios during the holidays, you know Sunset Boulevard is the most festive strip in the theme park. With Tower of Terror playing a projection snow, snoap falling from the sky, and the Citizens of Main Street caroling away, it really fills Guests hearts with holiday spirit. Unfortunately, we will be losing some of that festive joy this year.

Christmas just won’t be the same at Hollywood Studios https://t.co/raypio2TOS

The Citizens also came out and confirmed their departure from Hollywood Studios on their Facebook page:

The next round of layoffs is happening, and unfortunately at this point, some of the Citizens have been let go. We do…

The Cast of the Monsters Inc. Laugh Floor that has been making Guests cackle, and Disney dads feel personally attacked by putting them on a monitor for the who audience to see, will no longer be filling laugh tanks.

Layoffs came to the Magic Kingdom attraction, which is ridding itself of the voices, imagination, and creativity behind the characters we get to see during each performance. The characters on-screen were able to make the show so funny because there was an actual cast creating the jokes and voicing the characters behind the scenes. They were quick on their feet and were able to embarrass any Guest in the audience, making their vacation even more memorable and magical. 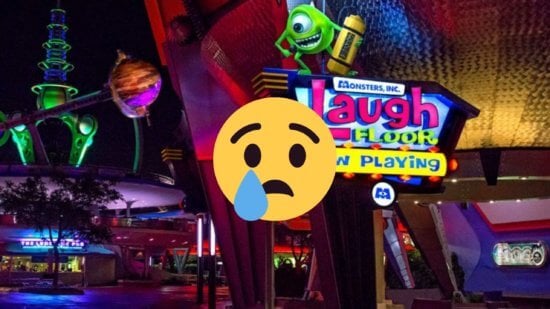 This offering is sad to see go, too, because it was indeed a full attraction at Magic Kingdom. It’s departure is sure to leave Tomorrowland feeling very empty. You can continue to show your support for the CMs at Monsters Inc. Laugh Floor by tweeting your favorite memories with the hashtag #laughfloormemories.

The Festival of the Lion King has also received lay offs. This came as a slight shock to many, as social distancing markers were put the the attraction queue, which made Guests think the show would be back to it’s ‘Hakuna Matata’ in no time. Unfortunately, that will not be the case.

The show seems to have come to a halt with the reporting of the laid off Cast Members, which is a true loss for Animal Kingdom as the show has been bringing joy to Guests for years with it’s Broadway level production.

Another fantastic show that resides in Disney’s Animal Kingdom that we must say goodbye to for now is Finding Nemo The Musical. The show has fantastic sets, takes place in a huge theatre, it’s family fun, and has music that will be stuck with you for the rest of your Disney vacation.

For now, it seems that we will have to just ‘Go With The Flow’ and hope that this show can swim back to Animal Kingdom after having gone to the drop off zone.

Hoop-Dee-Doo Revue is arguably the best dinner show on property. If you have ever been to the Fort Wilderness Campground and spend an evening singing along and scratching those wash boards with the Hoop-Dee-Doo Revue Cast, you know what a loss this is for the Disney World Resort.

The show was once of it’s kind, and is breaking Guests hearts to know that they may not be able to see the performance once again.

Disney Deciphered shared their feelings about the loss of the show, and also mentioned a solemn statement: “Don’t think this is over yet either.” And unfortunately, it is not.

The news about Hoop-De-Doo, Festival of the Lion King, and Finding Nemo workers being laid off hurts. Don't think this is over yet either 🙁

Beauty and the Beast — Live on Stage

The Beauty and the Beast Cast has also been let go from Disney’s Hollywood Studios. This comes as less of a surprise than others, only because prior to their departure, the Grand Floridian Orchestra took to the stage to play Disney tunes for Guests.

For Beauty and the Beast lovers like myself, this is a tough pill to swallow. The show boasted highly choreographed dance numbers, fantastic singing, amazing costumes, and a nostalgic feeling that will be missed dearly.

“We’re walking down the middle of Main St. USA,” is not a tune we will get to hear anytime soon. The Citizens of Main Street are another group among the laid off staff at Disney World that will not be creating magic in the near future.

The official webpage of the Citizens describe them as:

Say “how d’you do” to some fascinating folks from another era. Smartly attired in early 20th-century finery, these larger-than-life small-town denizens can be spotted along Main Street throughout the day.

They’re always charmed to make your acquaintance and bend your ear with the latest local scuttlebutt. You might even be treated to a rousing recital from the Main Street choir.

Don’t forget to bring your newfangled picture-taking gizmo—these folks are always happy to pose for a portrait!

It will be sad to no longer have those fun interactions on Main Street, U.S.A. at Magic Kingdom Park.

When you enter Pandora – The World of Avatar at Disney’s Animal Kingdom, it is likely that your jaw will drop at the level of detail and immersion that the land lends itself to. Not only is the landscaping perfection, but there are characters which add to the believability of the land.

The Mech Suits are giant robots from the Pandora world that look like a transformer is popping out from your TV screen into reality. It truly is a feet in Imagineering technology, and one that has Guests staring each time the ‘robot’ steps out.

Unfortunately, it seems that the Mech Suits at Pandora are also among the lay off group.

The mech suit at Pandora also

Indiana Jones Stunt Show Spectacular is one of Disney Hollywood Studio’s most fitting shows because it is unlike others as you, the Guest, get to travel into the movies and watch how Indiana Jones was filmed, and how stunts are performed. For a theme park that revolves around the concept of Hollywood, this was, in my opinion a staple show at DHS.

Sadly, the Cast has been included in this round of layoffs.

The Disney Junior Dance Party! was a classic hit for kids who wanted to groove with Doc McStuffins, Vampirina, Timon and Mickey for a high-energy musical celebration.

Disney Hollywood Studio’s does have Toy Story Land which is quite kid friendly, but the Disney Junior Live show was the only performace at the Disney park that catered strictly toward them and their age group. It also brought Disney Junior into the theme parks, which is a very popular group of Disney characters that we will no longer get to see.

If you have ever been waiting in the line for Slinky Dog Dash or Alien Swirling Saucers at Disney’s Hollywood Studios, you have likely heard some loud army men banging on some drums. The best part of this reveal is when you look to see what all the commotion is about, the men are fully painted green.

The Green Army Men brought life to Toy Story Land, and also brought a heartbeat to what would just be a plastic toy. Although this was a small offering, it was intimate and increased the immersion within the land. The Green Army Men are sadly part of the entertainment layoffs at Disney.

Have you always wanted to battle Darth Vader?

The Jedi Training Show which took place next to Star Tours at Disney’s Hollywood Studios, also features laid off Disney World Cast Members. The show was fun and interactive, and taught kids how to become a Jedi. Having watched the smiles beam on children’s faces as they discover ‘The Force’ has always been just as fun for me as a Guest, even if I am not participating.

Move It! Shake It! MousekDance It! Street Party

Move It! Shake It! MousekDance It! Street Party is one we do not want to say goodbye to.

Move It! Shake It! MousekDance It! Street Party took place around the hub on Main St. USA at Magic Kingdom. It featured the classic hit “It’s A Good Time”, where many Guests likely have distinct memories dancing along to the catchy tune with Mickey, Minnie, and all their friends.

The show’s Cast is also included in the Disney entertainment layoffs.

As we go deeper into this list, the layoffs at Disney do not get easier. The Cinderella Castle show that gives us a magical viewing of all our favorite Disney characters, is also leaving.

Mickey’s Royal Friendship Faire took place multiple times a day showcasing hits from Tangled, Frozen, and more! We got to jump into the Disney magic as Mickey rounded up all his pals for one giant party in front of the castle. At this point, all we can do is hope that the Cinderella Castle stage does not lie vacant for too long.

Dude! We do not want to see Turtle Talk with Crush go!

The EPCOT attraction is another we must say farewell to for now. Disney described the interactive show as:

The show is improvised, so it’s different every time. It’s an ocean full of laughs for all ages

The 28,000 layoffs that were previously announced have all been coming in waves, and this evening took a big chunk out of Disney Worlds entertainment Cast Members. Note that Disney has not officially stated any operational updates regarding these offerings, so at this time we do not know if or when we can expect them to return.

Disney World is magical because of it’s Cast Members, so all of us at ITM want to give them a big thank you for the smiles and memories they have given us visit after visit.

Want to say a big thank you to Cast Members? Let’s tell them in the comments below!