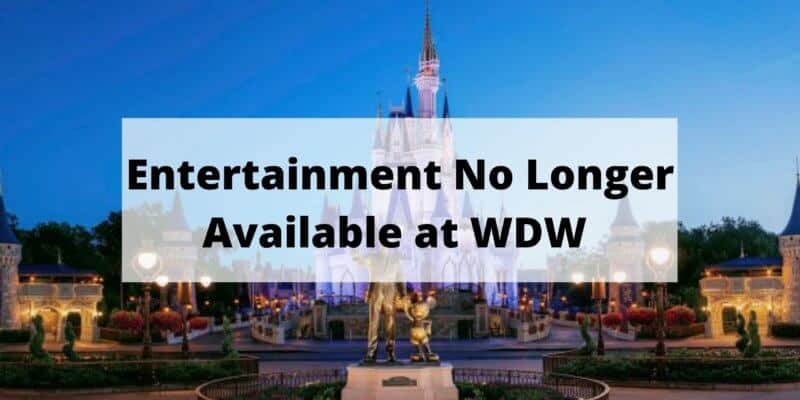 When you come on your Disney World vacation, the Disney performer’s and entertainer’s are often a very magical part of the experience. Many performers can also be quite niche, and something you can only find in Disney World!

With the recent massive lay off Disney conducted with almost 30,000 people losing their job, we also lost many performers. The loss is beyond unfortunate for Disney theme park goers and Cast Members. With the entertainment cuts we saw prior to the Disney World park closure to now, the entertainment options for Guests have unfortunately dwindled.

So let’s talk about what entertainment is no longer available at Disney, what has come back, or what modifications have been made. If you are heading to the theme parks soon, this list can help you know what to expect when you arrive, and know what offerings are available to you.

At EPCOT, back in March we lost lots of entertainment performers contracted by Disney. These are performers who worked in the various pavilions around the World Showcase providing culturally themed entertainment.

Many Walt Disney World Resorts have also lost performers in spite of the recent cuts:

‘YeHaa’ Bob Jackson – one of Disney’s more lively performers from the River Roost Lounge at Disney’s Port Orleans Riverside Resort has been let go. You can still catch him on Sunday evenings on his Facebook Live at the moment.

There are also may entertainment offerings at Walt Disney World that have been taken away with no return date in sight. The negotiations between Disney and the Actors Equity Association may also cater to why many of these shows have yet to return. Here are some of the large offerings that you cannot currently enjoy:

All of us at Inside The Magic will keep you updated on any possible return of entertainment offerings at the Walt Disney World Resort. We do hope to see the return of many lost offerings in the future once park capacity is able to return to normal.

If you want to see what entertainment offerings are available at Disney World yourself, why not book a Disney vacation? Our pals at Academy Travel can help you get started today!

Do you think Disney World’s entertainment offerings are worth the trip right now? Let us know!