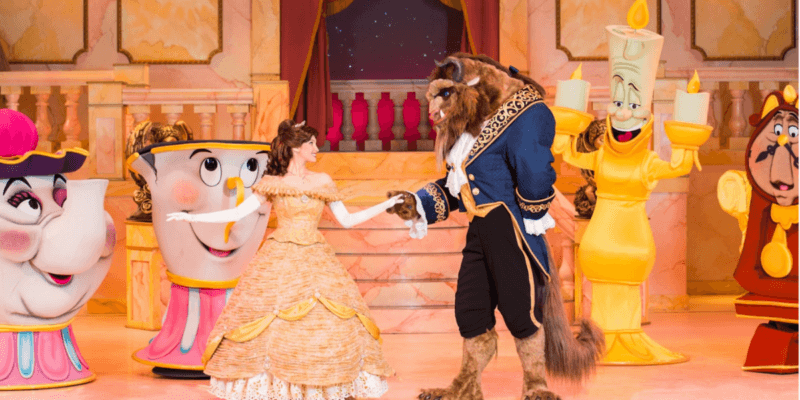 However, due to the ongoing pandemic, it appears that Walt Disney World might be making some major changes to its shows in the name of health and safety.

According to the Wall Street Journal, here are some of those changes.

Beauty and the Beast Live On-Stage

WSJ states, “The crowd size in Beauty and the Beast has been reduced and the entire show choreographed anew, so performers are at least 6 feet apart at all times.”

If one has visited the Magic Kingdom and experienced attractions like the Enchanted Tiki Room, it is clear that social distancing is enforced during attractions and shows. So it’s reasonably for full 3o-minute+ stage shows to implement similar same seating arrangements.

Since Disney has reportedly denied Actors’ Equity Association’s demands to have Cast Members tested and to allow face masks on stage, there is a need, then, to ensure proper social distancing just in case.

If Beauty and the Beast is getting re-choreographed in order to maintain social distancing, then it makes sense to see similar changes happen in the Indiana Jones stunt show. That means that the fake fighting scenes in the show will also probably be replaced with something else. One could also speculate that the audience participation aspect (where Guests can become extras in the “movie” they are making) will also be indefinitely cut from the show.

WSJ states, “a ballet pas de deux between two birds in a Lion King show” is unlikely to return.

The cast of Disney’s Festival of the Lion King generally sticks to themselves and it would not be difficult to include social distancing for most of the show. Except for one scene. The aerial “Love Bird” ballet that occurs while the cast sings “Can You Feel The Love Tonight?” This is one of the most beautiful numbers in the show and will, undoubtedly be missed if removed.

Perhaps we will soon have the stage performers back bring their beloved characters to life on-stage once again even if it is with these changes.

What do you think of these changes? Let us know in the comments!