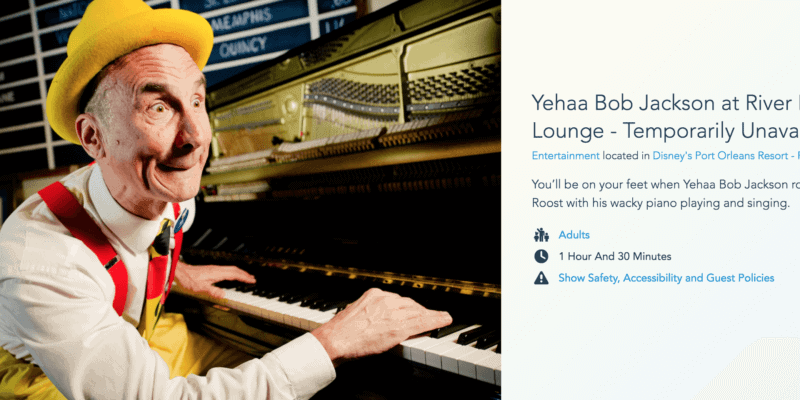 This one stings all of us at Inside The Magic particularly hard today. Bob Jackson, or you may know him better as ‘Yehaa Bob,’ is one of the many Cast Members affected by Disney’s huge layoff.

Today we learned that Disney World and Disneyland would be laying off 28,000 Cast Members due to large financial loss during the pandemic. With Disney World in Orlando Florida operating at 30% capacity, and Disneyland Resort in Anaheim, California still closed –– the companies loss is in the billions.

The rippling effect of this has cost us Guests and Disney fans to lose some of the Cast Members that have brought us the most joy, and ‘Yehaa Bob’ is definitely one of them.

Bob Jackson performed at Disney’s Port Orleans Riverside Resort at The River Roost Lounge and if you have seen his show, you know it is a Disney experience in itself. Bob bring the house down, interacts with the audience, his piano literally rocks, and he has more energy than a child! He really does create a once in a lifetime Disney experience, I myself never thought I would do the hand jive at Walt Disney World, but Bob got me to do it!

And that how it ends, not with a bang but with a whimper. I’ve just learned my act will not be returning to Disney. I made so many friends over the last 23 years, it was a great time, we had a lot of laughs together. I’ll be continuing my Sunday shows for now. I’ll keep you posted, I’m still digesting all of this-

And that how it ends, not with a bang but with a whimper. I've just learned my act will not be returning to Disney. I…

Bob could get a whole bar of people who did not know anything about each other shouting like Tarzan, singing together, dancing together, and he would never forget you. Bob will always remember a friendly face and he embodied the magical qualities of Disney to a tee.

Check out ITM’s Senior Editor Kelly with Bob Jackson after a show, those smiles are real folks!

After learning that Disney’s Grand Floridian Orchestra would be playing their final symphony, that so many Cast Members were losing their job, and that ‘Yeehaa Bob’ would no longer be doing the YMCA, it’s been a tough week for Disney fans (and we are not even halfway through!).

All of us here at ITM are sending our best wishes to Bob and all Cast Members who have been affected by this layoff. And Bob, just so you know, your hair looks GREAT!