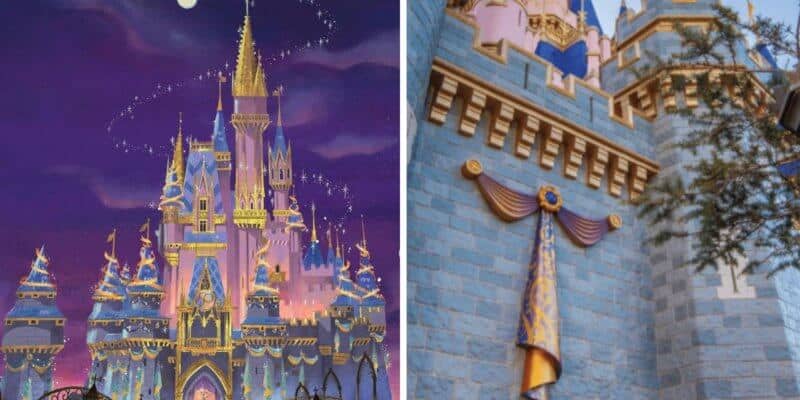 With the Walt Disney World Resort celebrating 50 years of magic this October, Guests cannot wait to see what Disney has in store in terms of decorations for the theme parks. Although every theme park will be decorated for the celebration, it is not surprising to know that all eyes are on Cinderella Castle.

Considering that the 25th anniversary had the castle decked out like a giant birthday cake (a version which I loved)  — many Disney lovers have been patiently waiting to see what 50 years was going to look like at Magic Kingdom.

Recently we reported on artist renderings of the new pink and blue iridescent rose gold castle design, as well as photos of the castle’s anniversary transformation. But, where did this decor idea stem from?

Imagineer Zach Riddley (@thezachriddley) has taken to Instagram to give Guests a behind-the-scenes look at where the inspiration for the 50th anniversary design came from, and it seems the answer is the late Mary Blair. Mary was an incredible artist, described by D23 as “an imaginative color stylist and designer”.

She worked hand-in-hand with Walt Disney and was one of the first women to rise to prominence within The Walt Disney Company. Blair created some of the most iconic and memorable designs for Disney theme parks, such as the unique look of “it’s a small world” and the mural with the five-legged goat at Disney’s Contemporary Resort.

Our past is always inspiring our future. Our Imagineering team drew inspiration from Disney Legend Mary Blair for our transformation of Cinderella Castle at Magic Kingdom in honor of the upcoming 50th Anniversary celebration beginning October 1, 2021.

A couple weeks ago we shared a rendering of how this new décor will come to life. And for the first time – I’m excited to reveal this new @WaltDisneyImagineering illustration of Cinderella Castle in full 50th Anniversary regalia in the style of Mary Blair.

Her enchanting visual designs and use of color for the film Cinderella were our source of inspiration, which you can swipe to see courtesy of the @DisneyAnimation Research Library. We wanted to go back to the original story of this beautiful structure to create something entirely original for this grand celebration. Fanciful ribbons wrap in air around the castle turrets – inspired by the scene in the film where Cinderella is transformed in her stunning gown. And Mary’s designs provided us a beautiful palette of rich hues to choose from – deep blues, purples and shimmering golds mesh with a touch of EARidescence that will catch light and evolve through the day and into each evening.

Over the coming months we’re excited to share more of our progress as this stunning transformation happens before our eyes.

Mary knew exactly how to enchant Guests with her design and it seems that is exactly what Disney wanted to do with the Cinderella Castle design, so who better to pull inspiration from? It seems that Cinderella Castle will be in a constant state of magic for 18 months as it will shimmer and transform as lights hit it, just as Cinderella once did when Fairy Godmother transformed her into a regal princess.

As Zach noted, and as we have already seen, the transformation to turn Cinderella Castle into the celebration showpiece that Guests cannot wait to see will happen over the next few months, so stay tuned to Inside the Magic as we continue to bring you updates on how the castle is looking!

As we have previously reported, at EPCOT, Guests will see a new Spaceship Earth lighting package which will shimmer for years to come as it remains permanent on the structure, Disney’s Hollywood Studios will light up Tower of Terror, and Disney’s Animal Kingdom will have the Tree of Life sparkling. From the concept art, it seems that the big connecting factor here is to make sure every park is shining for the anniversary.

Are you planning on attending Disney World’s 50th anniversary?