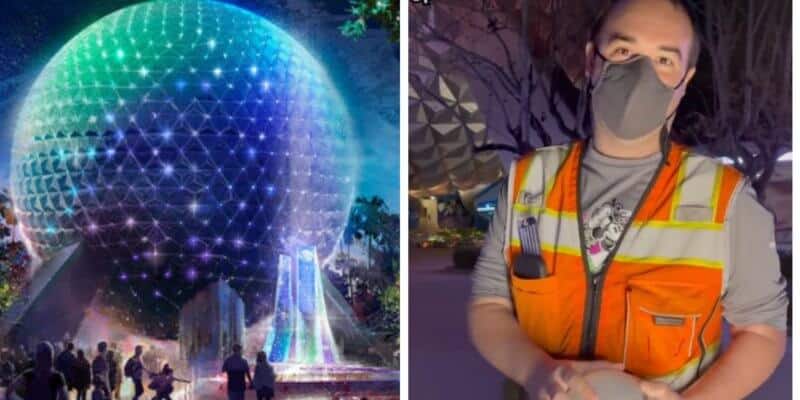 When Disney World announced the plans that Disney would be transforming Spaceship Earth at EPCOT for the 50th anniversary celebration, and then, that the transformation would stick around after the 18-month party, Guests were curious to know what the change would look like. Now we have a closer look thanks to Disney Imagineering on what the transformation will be!

Upon first glance at the concept art, it seemed as if Disney was planning to make Spaceship Earth sparkle. Recently Imagineer Zach Riddley announced that the brand new lighting package would be available for Guests as of October 1. In the photos, we saw Imagineers inserting what looked to be little lights in between every triangle point on the globe.

Disney Parks official TikTok shared a video featuring Jason, one of the many talented Imagineers working in the Spaceship Earth project. He explains the special lighting that has been created and how it is being installed on EPCOT’s icon.

It seems that the points of light will beam out a multitude of colors from each bulb which will, in theory, shoot in every direction! Then, on the sides of the light are smaller holes. These holes will allow the light to not only shoot up and out into the theme park but also, across the side of Spaceship Earth.

Related: Disney Park Pass Extension Could Be Due to 50th Anniversary

At the moment, Spaceship Earth is lit with external lighting shining onto the globe, but this new package would eliminate the need for that as it will not only illuminate the park, but it will light itself as well. This creation by Imagineering is yet another spectacular and efficient way to create magic for years to come!

Something I personally find exciting about this new creation is that since each light is individual, Disney will have the chance to program different lighting “shows” if they want, which would really make the Spaceship Earth twinkle. Right now, we know it will be a spectacle, but Disney has yet to confirm if there will be any sort of evening show associated with the new lighting package. That being said, Jason continued to mention that the lights would “tell a story” so it will be interesting to discover what exactly that means.

EPCOT will also debut its new nighttime spectacular, HarmonioUS, this year! This means that not only will Guests get a spectacle as they enter and exit the park, but the World Showcase will soon house what Disney is deeming to be the “biggest nighttime show” they have ever created. New rides like Guardians of the Galaxy: Cosmic Rewind and Remy’s Ratatouille Adventure are on EPCOT’s slate, alongside Future World’s giant renovation.

What do you think of these new lighting fixtures for Spaceship Earth?

If you want to be at the Walt Disney World Resort to celebrate 50 years with Mickey and Minnie Mouse, you need to book a vacation! Click here to get started today!