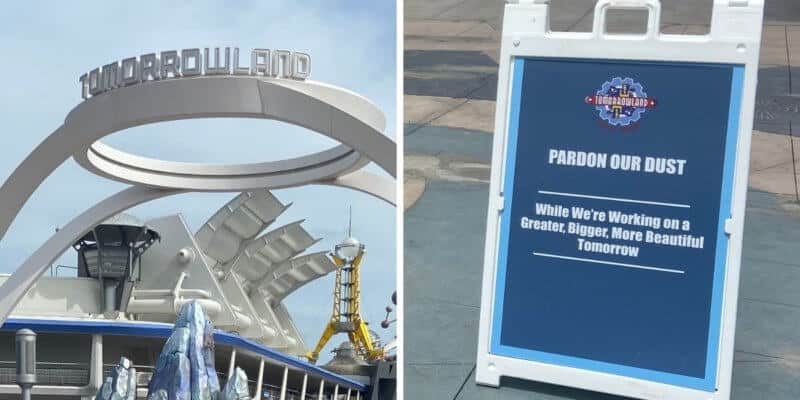 Both Images: Credit Inside the Magic Kelly C.

Walt Disney World is making several changes to its theme parks — Magic Kingdom, EPCOT, Disney’s Hollywood Studios, and Disney’s Animal Kingdom — in preparation for the 50th anniversary, which will kick off on October 1, 2021.

And now, it looks as though Tomorrowland at Magic Kingdom is also undergoing construction as it is getting a major update just months ahead of Disney World’s 50th anniversary.

We have already seen Cinderella Castle undergo a makeover in honor of Walt Disney’s Cinderella (1950) celebrating 70 years, as well as receive additional embellishments for the 50th anniversary specifically.

Additionally, Disney Imagineers already began working on attractions including Prince Charming Regal Carrousel, Peter Pan’s Flight, Dumbo the Flying Elephant, and others, so they are in tip-top shape for the 50th. And we can’t forget about the Tangled area of Magic Kingdom and how it recently received some tender loving care as well, which you can read more about here.

Now, on a recent trip to Magic Kingdom, it looks as though Tomorrowland is the next section of the theme park to receive a refurbishment.

Related: Disney’s Ticket and Transportation Center Gears Up For Construction

As you walk closer to the main Tomorrowland bridge, which connects Tomorrowland to the Main Street hub, you will notice a sign that reads “Pardon our dust while we’re working on a greater, more beautiful tomorrow.”

You can also still see the iconic gear-themed pavement in this area of the land.

It seems as though this construction is moving at a fast pace, and so we suspect the pavement to be fully replaced in time for Disney World’s 50th anniversary, which starts on October 1, 2021.

Are you excited to see the gear pavement being replaced in Tomorrowland or are you upset? Let us know in the comments below.