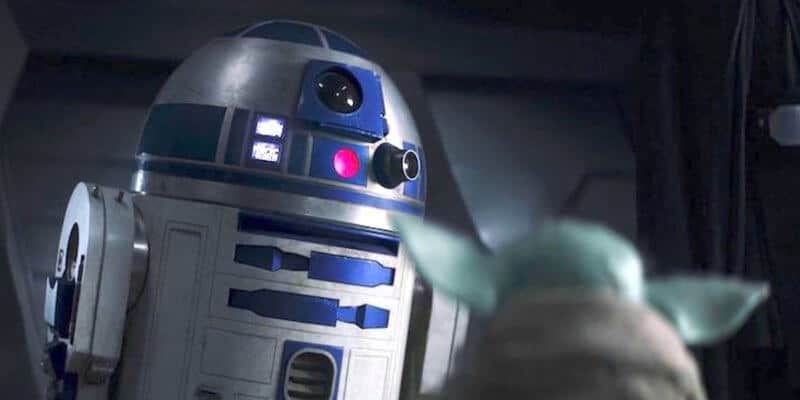 For long-time Star Wars fans, the final moments of The Mandalorian Season 2 finale episode — “Chapter 16: The Rescue”– were among the most epic since, well, the Empire was defeated in Star Wars: Episode VI – The Return of the Jedi (1983).

Now, however, it appears that this might not have been the first time Skywalker and R2-D2 saw Djarin and his foundling during the second season of showrunner Jon Favreau and executive producer Dave Filoni’s hit streaming Star Wars series.

At the end of every episode of The Mandalorian, stunning concept art is showcased while the credits roll. Sometimes, this artwork includes fun ‘Easter eggs’ for Star Wars fans — like the sequel trilogy’s Poe Dameron (Oscar Isaac) hiding in art at the end of “Chapter 15: The Believer.”

Now, CBR has pointed out that an R2 unit is featured in the concept art of planet Corvus, which appeared in The Mandalorian Season 2, Episode 5 — “Chapter 13: The Jedi” — in which Ahsoka Tano (Rosario Dawson) was introduced in live-action for the first time.

Perhaps the concept art implies something bigger than an Easter Egg….

…Luke arrives to the Imperial cruiser because he hears Grogu’s call through the force. Luke’s attempt to train a new generation of Jedi is still fresh at this point in the timeline, and he is not yet jaded in that endeavor. He could be actively building a new Jedi Council of some description. In that case, R2-D2’s appearance on Planet Corvus may be in a research and observe capacity while assisting Luke on his mission. Not only is the Magistrate [Diana Lee Inosanto] on Corvus, but so is former Jedi, and Anakin Skywalker’s former apprentice, Ahsoka Tano [Star Wars: The Clone Wars and Star Wars Rebels].

There also, of course, exists the possibility that Skywalker was on Corvus with his loyal droid, keeping watch on the Force-sensitive foundling and biding his time before making his presence known.

Perhaps, too, as CBR suggested, Skywalker was searching for his father’s former Padawan — it comes to light that Tano is on a quest to find Grand Admiral Thrawn and Ezra Bridger wherever in the galaxy — or the World Between Worlds — they happen to be.

Because R2-D2 is certainly not the only R2-series astromech droid in the Star Wars universe, it is also certainly possible that the unit in the Corvus concept art is simply meant to be fun for fans — and, perhaps, to foreshadow the fact that R2-D2 ultimately did appear in the sophomore season of The Mandalorian.

Fans can next expect to see R2-D2 back in action with C-3PO — and maybe even an animated Grogu character, depending on where the show falls in the Star Wars timeline — in the animated series A Droid Story on Disney+.

As for whether or not Skywalker, R2-D2, and Grogu will be back in The Mandalorian Season 3, only time will tell. Creator Jon Favreau has confirmed that “the next chapter” in The Mandalorian saga will arrive in December 2021 with The Book of Boba Fett.

The third season of The Mandalorian, plus spinoffs Ahsoka and Rangers of the New Republic, are not on Disney’s 2021 release schedule. The Star Wars galaxy is expected to continue to expand on Disney+, with The Mandalorian saga at its center — at least 11 new series are expected over the course of the next several years.

What do you think? Was R2-D2 keeping tabs on Grogu and our favorite beskar armor-clad bounty hunter well before the two saw one another on the Imperial remnant’s ship?