Newsom vs. DeSantis: How Opposing Views Affect Theme Parks - Inside the Magic 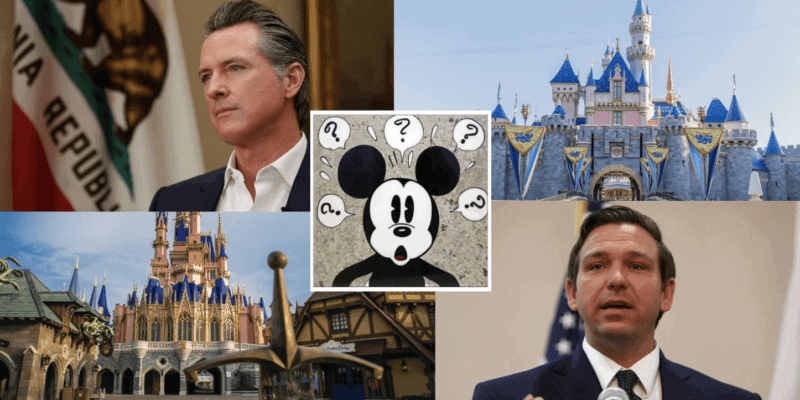 At this point, if you are a theme park fan, you would have to be making a spice run in a galaxy far, far away to not know that California Governor Gavin Newsom and Florida Governor Ron DeSantis have diametrically different views when it comes to the theme parks in their states during the coronavirus pandemic.

Both states are home to Disney theme parks — Walt Disney World Resort in Orlando, Florida, and Disneyland Resort in Anaheim, California — but the ways in which the states have approached reopening the two U.S. Disney Parks couldn’t be more different.

What is happening in California?

Now, 262 days later, the CA Governor has only recently issued theme park reopening guidelines — which have been called “unworkable” and “unfair” by Disneyland President Ken Potrock and the California Attractions and Parks Association (CAPA).

California, overall, has some of the nation’s strictest COVID-19 guidelines. The Governor’s Blueprint For a Safer Economy reopening plan places every county in a tier based on case numbers and other health statistics related to the coronavirus outbreak.

In news conferences, Governor Newsom has even gone so far as to avoid saying the names of theme parks, such as Disneyland. In one particular statement, he said:

“And so, respectfully, deep respect because I understand, again, as someone with four young kids, the reverential identity they have with one particular brand that you are identifying and their desire to be entertained and their desire of those that desire of those that rightfully want to get their jobs back and to get back to some sense of normalcy. Forgive me, but we as a state are going to be driven by data and science, and we’re going to be driven by public health first.”

The Downtown Disney District is currently open, with restrictions, and Disney California Adventure’s Buena Vista Street is offering limited holiday shopping and dining options. At this time, some health officials in Orange County — where Disneyland Resort is located — believe it could be next summer before the property is able to fully reopen with operational rides and attractions.

What is happening in Florida?

On the other end of the COVID-19 restriction spectrum lie Governor Ron DeSantis’s Florida theme parks. Walt Disney World Resort began its phased reopening of its theme parks on July 11 and has remained open ever since.

Guests (over the age of 2) who visit any of Disney World’s four theme parks — Magic Kingdom, EPCOT, Disney’s Hollywood Studios, or Disney’s Animal Kingdom — or the Disney Springs district are required to wear face coverings, abide by social distancing protocols, and adhere to all Cast Member direction.

It is important to note that Governor DeSantis allowed the state to enter Phase 3 — which lifted restrictions on theme parks — and that any current protocols and regulations are The Walt Disney Company’s, not the state of Florida’s.

Disney has recently increased capacity at its Florida theme parks to 35% — nearly a 50% increase from its initial reopening over the summer. However, all original pandemic health and safety protocols are still in place.

Governor DeSantis’s approach to talking about theme parks is so opposite of Governor Newsom’s that it can sometimes be hard to believe they live in the same nation. Florida’s Governor frequently praises theme parks for remaining open and helping the state economy.

In a recent statement to the press — his first in over a month — Governor DeSantis stated, as per the Orlando Sentinel:

“Everyone now acknowledges that the theme parks have not led to any major outbreaks,” he said.

He blamed the federal government’s 15-day shutdown in the spring for the industry’s woes, saying it was that order that prompted Disney, Universal and SeaWorld to shut down in March.

At this time, in spite of surging coronavirus cases throughout the United States, Governor DeSantis seems to have no plans to even consider closing Walt Disney World for a second time — though both Disneyland Paris and Hong Kong Disneyland have closed on multiple occasions as a direct result of a rise in COVID-19 cases in their respective countries.

How is this impacting theme park fans?

Like it or not, theme parks have become political in the wake of the pandemic. There have even been calls for Disneyland officials to take legal action to reopen in the Golden State (there is a precedent for this, as some small businesses have already filed lawsuits).

On the other hand, however, there are those who absolutely agree with Governor Newsom’s take on keeping theme parks closed for the foreseeable future. Twitter user Vicki Rutherford, for instance, replied to an official Disney Parks post featuring an October statement from Disneyland President Ken Potrock by saying:

I am happy every time our state isn’t spiking. I’m with Governor Newsom.

I am happy every time I see our state isn’t spiking. I’m with Governor Newsom.

Many Disney World Guests, however — both from Florida and from other states — agree with how Governor DeSantis has handled reopening. Dr. Mike McMann, for example, commented on a post from vacationer Daniel Kotzin and said:

Enjoy! I brought my family to Disney World 3 weeks ago and it was glorious!

Enjoy! I bought my family to Disney World 3 weeks ago and it was glorious!

While there will always be differing opinions in both states, the ways in which the two Governors have approached reopening have undoubtedly had an impact on theme park fans’ opinions.

People tend to trust state leaders’ guidance, so when their opinions about the coronavirus differ this dramatically, it is certainly challenging for families to know exactly what to believe, particularly in the internet age.

Related: Disneyland, WDW, & Safety: Should Parks Operate in a Pandemic?

At the end of the day, it appears that everyone — including Governor DeSantis and Governor Newsom — is handling the coronavirus pandemic to the best of their abilities.

As an Indiana resident who is a Disneyland Annual Passholder — and who recently returned from a trip to Walt Disney World — I have experienced nearly every side of the theme park reopening issue. And while I respect California’s commitment to public health, I never felt unsafe during my recent trip to Disney World (and did not contract COVID-19 as a result of my visit).

As one Anaheim official told Inside the Magic, there is, perhaps, a “responsible third path” — a middle ground — if you will, that all theme parks in the United States should be following to aid the hospitality industry, protect public health, and allow people to get back to their lives.

What do you think? Are Gov. Newsom and Gov. DeSantis in the right or wrong here? Has a state leader’s view of theme park operations impacted your own opinion? Let us know.