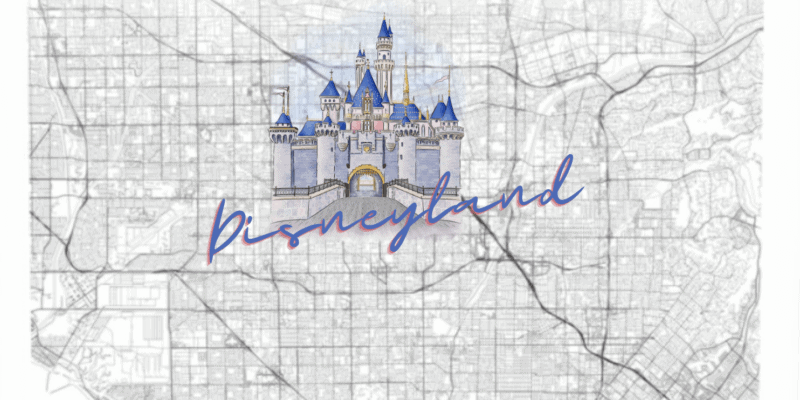 This afternoon, Inside the Magic had the opportunity to speak exclusively with the City of Anaheim’s head of communications, Mike Lyster, regarding his recent visit to Disneyland Resort with Anaheim Mayor Harry Sidhu.

Here, we share the details Mr. Lyster [pictured below in the white shirt]  provided about the current status of Disneyland Park and Disney California Adventure Park as the city awaits theme park reopening guidelines from California Governor Gavin Newsom.

Related: Newsom Will Meet With Theme Parks This Week

Before launching into details about his visit to Disneyland Park last week, Mr. Lyster began by speaking about the health and safety protocols that Disney has already implemented in the Downtown Disney District shopping and dining area, which was allowed to begin its phased reopening process over the summer. He shared the following:

“We do have to start with Downtown Disney because it is a blueprint for what the parks would look like…just to get in there is a cursory health check and that’s not that unusual, but they [Disney] have actually hired clinicians from Hoag Hospital [excellent Orange County hospital in Newport Beach, CA] to screen everybody who goes into Downtown Disney.”

“Of course, they’re taking temperature and if somebody doesn’t pass on the first go-around, they’ll bring them into a tent and they’ll let them sit in the shade for a few minutes and then they’ll try again. If somebody doesn’t pass in two tries, they will give them some counseling about symptoms…and, perhaps, even suggest seeing their doctor or getting tested….that alone is the most extensive screening we’ve seen outside of a hospital.”

“Once you get into Downtown Disney, you have hand wash stations everywhere, sanitizer, capacity limits, you’ve got floor markings everywhere…there are big signs that say ‘Don’t sit here’ to ensure social distancing.”

“[Downtown Disney] is much more thorough than we would see in any other outdoor shopping mall in our area. They just went above and beyond.”

During Mr. Lyster’s trip beyond Disneyland’s locked gates, he got to see many of the health and safety measures that have already been implemented in the theme park. Since Disneyland Resort was originally slated to reopen on July 17 — the 65th Anniversary of Disneyland Park — many key changes have already been made to Walt Disney’s original Magic Kingdom.

Mr. Lyster began by sharing something every Disneyland fan can relate to during these difficult months without being able to visit the parks:

“It’s kind of emotional…I’m a Passholder myself and go regularly in normal times…so to walk into the gates on the backside of the train station, you first go ‘Wow, it has been too long!’…we know Disney carries a lot of emotional value for folks…then you turn the corner and you see Main Street and while that’s always very heartwarming to see, then it dawns on you that you’re looking at it very different here.”

He also spoke to Inside the Magic about some of the basic health measures that have been taken to ensure Guests’ and Cast Members’ safety. Note that many of these protocols that Lyster is speaking on have been touched on by Disney, while others are ones we have seen implemented similarly at Walt Disney World.

He shared the following:

“They have cleaning protocols for high touch, medium touch, and low touch. Of course, face coverings are required at all times…they are extensive floor markings everywhere. Just like Downtown Disney, there are hand wash stations with a sink, soap, paper towels throughout the parks.

“They [Disney] have an extensive camera system as well…they use to help identify issues where people might be bunching up or congregating. They will have Ambassadors in the park go over there and make sure people keep moving.”

He continued, sharing details about his visit to the iconic Space Mountain roller coaster in Tomorrowland:

“The first big change they’ve done is to ride loading. They will always ensure six feet of space between parties. So taking Space Mountain for example, where you have two tandem attached rockets with six people each, what they would do if there’s a party of four is sit that party in the first two rows, leave the back row empty, and then begin loading the next one.”

“Depending on your mix of parties, they’re always going to be sending out a rocket un-full, unless there was really a party of, say, 12 people. Basically, they’re going to separate and make sure everybody is going to have that distance between them.”

“Also, what they call a turnaround in a line…when you’re face-to-face either with somebody slightly behind you in line or slightly ahead of you in line…they’ve put in plastic shields. Anywhere there’s a situation where you would find that, where people are not not able to keep six feet of distance in a linear queue, at that point they have put in shields. They’ve also done so for ride operators.”

“Some rides will change completely, so Peter Pan’s Flight, it’s one of the original rides, built in the ’50s…it’s wood railing area is very tight. They won’t even use that. You will all queue outside and once you get to the wood railing, you would go straight to the pirate ship area [ride vehicle loading area].”

Mr. Lyster also noted that at New Orleans Square’s Haunted Mansion, the experience will be modified, as we have seen at Magic Kingdom:

“…they’ll just usher people through that room [the stretching room at the beginning of the ride]. You just won’t have that experience [during the phased reopening process.]

We also learned that a couple of Disneyland attractions, as well as live stage shows, are unlikely to be available on Disneyland’s reopening day, although Disney has not yet announced for which attractions and shows will be operational:

“The monorail and the submarine ride, they probably will not be offering those straight away…theaters, as well. Even though technically they could operate theaters, I think they will choose not to.”

Even the “backstage area” where Cast Member break rooms and other employee-only areas are located have been thoroughly revamped with, for example, plastic shields on tables to separate Cast Members during breaks and, Mr. Lyster noted:

“let’s say my spouse and I both work there, or even my roommate, they don’t allow us to sit together…they don’t want to have anyone congregate among employees.”

These precautions prove that Disney is, as the company has stated repeatedly, putting Guest and Cast Member safety first as they go through the process of reopening any Disney theme park property.

On Disneyland Resort’s Stores and Restaurants

Mr. Lyster shared extensive details with us about how the stores and restaurants inside of Disneyland and Disney California Adventure will operate once they are allowed to reopen to serve Disneyland Resort Guests:

“In stores, they have installed plastic barriers at all checkouts and they’ve removed a lot of displays to create more floor space. With restaurants, they have changed menus, oftentimes they’ve streamlined menus. This helps to have fewer people in a kitchen at any one time.”

“And then, the kitchens they showed us have extensive floor markings, they have sanitizing stations everywhere with sanitizer spray and a clock…you may end up cleaning your station before that, but the clock goes off at periodic amount of time [i.e. every hour or 90 minutes] and you hear that and you clean.”

“Restaurants were something that the Orange County Health Care Agency brought to their [Disney’s] attention…so they took that advice from our health care agency and made those changes.”

Mr. Lyster spoke to us about the fact that people throughout the United States have been safely living their day-to-day lives throughout the ongoing pandemic. Among the sentiments he shared, he said that:

“this isn’t a choice between public health and the economy. There’s a responsible middle path that we’ve all been living in since day one…all the best practices we’ve learned over six months, we believe could not be applied to something larger, like a theme park, where most of the action is outdoors.”

“Plus, we have seen what Disney has done. It is among the best, if not the best, protocols and safeguard that we have seen put in place…and we’ve looked at a lot of businesses here [in the Anaehim area].”

Finally, Mr. Lyster shared details about how the city of Anaheim has been impacted by the continued closure of Disneyland Resort amid COVID-19:

“The council has not taken a formal position…but, our Mayor, who is a spokesperson for our city, has actively been out calling for not only guidelines, but reopening. He has joined with our neighboring city mayors, the mayors of Buena Park and Garden Grove, for example, in holding a press conference a few weeks ago.”

“He has been a very strong advocate for not only guidelines, which is a precursor to reopening, but to reopening. We certainly have seen what the impact is on our city.”

“We have a budget deficit of $75 million to $100 million and there is no doubt that is caused by the unprecedented closure of the parks for nearly seven months now. Also contributing to that, we have a convention center and the Honda Center and Angel Stadium are not doing what they typically do either, but the parks are the big driver, drawing about 25 million visitors a year.”

“Most folks who stay in a hotel here [including Disneyland Good Neighbor Hotels, like the Mariott, below], which is where we get most of our revenue, oftentimes they are coming to visit the parks.”

Mr. Lyster concluded our time with him by noting:

“It was clear to us that they [Disneyland Resort officials] are ready operations-wise to reopen. Of course, they would need some time to call back stuff and do some prep work, but they have put in-place everything that is needed. Like, I said, more extensive than anything we have seen anywhere else.”

Mr. Lyster also told us about the Magic Makers Unite: Reopen the Gates rally that will be held this Saturday, October 17 on Harbor Boulevard in front of Disneyland. If you are interested in supporting the reopening of Disneyland Resort, read more about the event here.