Anaheim Mayor Visits Disneyland Amid Closure - Inside the Magic 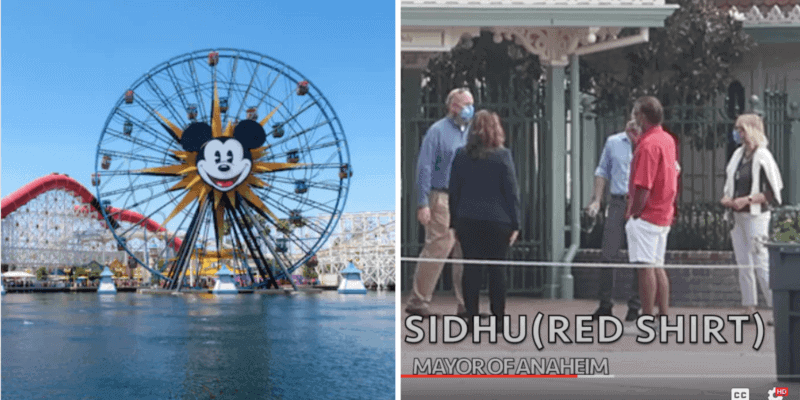 Recently, we’ve been covering this week’s opening of the Backlot Premiere Shop inside of Disney’s California Adventure Park at Disneyland Resort. The store, which is currently functioning as a Halloween-themed pop-up extension of Downtown Disney, can be found in the DCA Stage 17 area.

YouTube user Best Life & Beyond visited the newly-opened store this week, where they saw Anaheim Mayor Harry Sidhu paying a visit to Disneyland Resort. Mayor Sidhu can be seen in the red shirt in the following screenshot:

Although the exact purpose of the Mayor’s visit to Disneyland this week is unknown, it is no secret that he has been working hard to sway California Governor Gavin Newsom toward reopening California’s numerous theme parks, including, specifically, Disneyland Park and Disney California Adventure.

Related: How Will Disneyland Be Impacted as the County Reopens?

In fact, Mayor Sidhu recently invited Governor Newsom to visit Anaheim and see the economic impact of the theme park closure and the health and safety protocols the parks have taken for himself:

Each day that goes by the economic toll is rising for working families, small businesses, and our city. My invitation still stands for Gov. Newsom to visit Anaheim and see the impact first hand.

Since we originally published this article, Mike Lyster, head of communications for Anaheim, reached out to Inside the Magic to provide more details. Lyster was with Mayor Sidhu during the tour.

“We toured and saw public health safety protocols put in place at Downtown Disney and at Disneyland Park, looking at restaurants as well as Space Mountain for idea of how the attraction would operate,” Lyster said. “What Disney has done at Downtown Disney and at the parks is among the strongest we’ve seen in our city and inspires confidence that they are ready to safely and responsibly reopen.”

Walt Disney Company executives have also been vocal about their desire for Disneyland Resort to reopen, even going so far as to indicate that the state of California is, in large part, responsible for Disney’s recent mass layoffs.

For the Governor’s part, he indicated yesterday that he would like more stability in COVID-19 data from the counties where theme parks are located, including Disneyland’s Orange County. He stated that he is in “no hurry” to reopen Disneyland Resort or other theme parks in the state.

It is worth noting that Mayor Sidhu seemed in good spirits during his time at Disneyland, waving at and speaking to Guests who were visiting the Downtown Disney District, which has begun its phased reopening.

View the full video of Mayor Sidhu’s visit to Disneyland below: