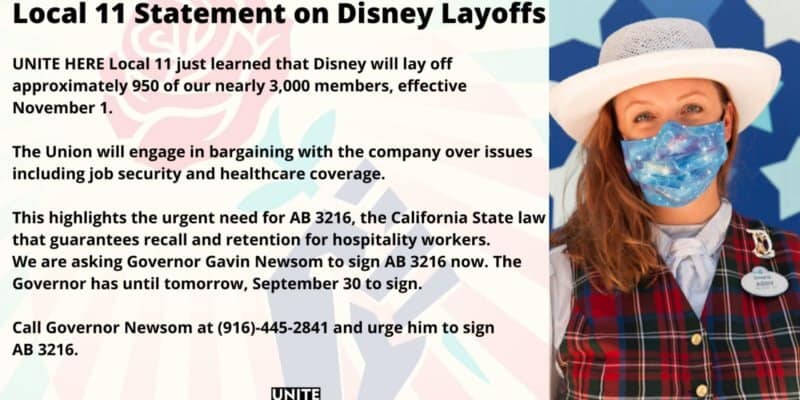 Yesterday, Disney made the decision to lay off 12% of their staff. This percentage is equivalent to 28,000 people of a 220,000 person company (around 100,000 of which are U.S. Disney Parks employees). According to CNBC, Executive, salaried, and hourly employees have all been affected by the layoffs. Cast Members who received the email from Josh D’Amaro stating that their Cast Member position at the Walt Disney World Company has been terminated have all been struck with the question: “How are we going to survive the next couple of months”.

The end of Josh’s letter stated:

As you can see, the mention of discussing next steps with unions is something that is needed for all union Cast Members. We have started to see a few California Unions speak out.

On the Facebook group for Workers United Local 50, the union shared the following message to their members:

As you are all aware of the, company announced this afternoon that after 7 months of shutdown Disney will begin to undergo the lay-off of 28,000 of executive, non-union, salaried, and Union cast members between Walt Disney World and Disneyland. Local 50 cast members will be included.

There is a lot of information we don’t know now and we are scheduled to meet with Disney in the coming days to get more information and bargain over the effects.

We will get through this. We know everyone has a lot of questions. We will keep everyone posted with information as we figure this out. If you have questions feel free to reach out to us here or at the office (714 502 0220) and we will get back to you as soon as we can.

Members,As you are all aware of the, company announced this afternoon that after 7 months of shutdown Disney will…

In this union alone, over 2,500 Disney Cast Members have lost their job, and it seems that not everyone has even been notified as of yet.

This union is set to lose 950 Disney Cast Members. This union calls on Governor Newsom to sign AB 3216 which is the California State law which will guarantee recall and retention for hospitality workers — this could save jobs for Disneyland employees.

Disneyland President Ken Potrock, Disney Parks Chairman Josh D’Amaro, and many more Disney Executives have been urging Governor Newsom to reopen Disneyland Resort. Disney has safety measures in place and is ready to work with the Governor to create a reopening plan for theme parks. D’Amaro seems to be heavily blaming the loss of these jobs on California’s inability to reopen Disneyland and Disney California Adventure. As of this article’s publication, Newsom has yet to comply.

All of us at ITM continue to keep Cast Members who are being affected by the layoffs in our thoughts at this time.