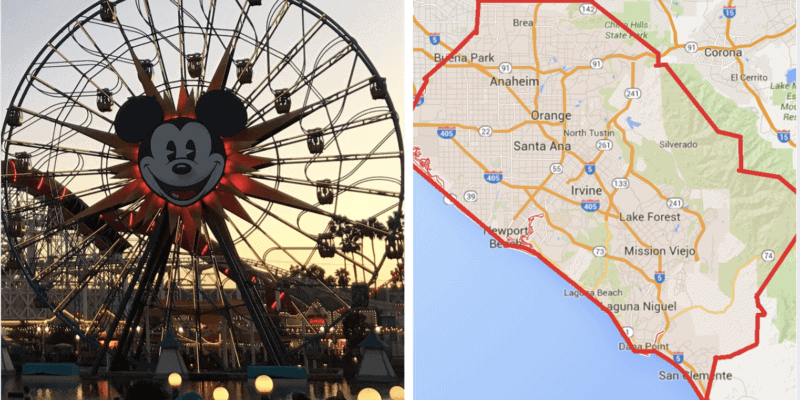 Recently, Disney Parks fans around the United States have found themselves learning more about California’s tiered Blueprint for a Safer Economy plan than they likely ever intended to.

Orange County, where Disneyland Resort in Anaheim is located, began in the “widespread” Purple tier and has been in the “substantial” Red tier since September. Lately, there has been much talk about what will happen when the county is allowed to move to the Orange tier.

Here, we explore some of the details.

What needs to happen for Orange County to move to the Orange tier?

A Voice of OC article explains the coronavirus case numbers that are required for any county in California to move to the Orange tier:

The case rate Chau was referring to is one of the key metrics in the state’s new tiered listing, which puts counties into four different levels of reopening.

A Voice of OC analysis showed there’s an average of six new daily cases per 100,000 residents over a seven-day period as of Monday.

The county needs to hit a case rate of less than four in order to reopen more businesses.

When the new tiering system was rolled out, OC started in Tier One — the most restrictive one — and eventually moved into Tier Two last month, also known as the Red Tier. That means churches, restaurants, movie theaters and gyms were able to resume limited indoor operations.

Theme parks, however, do not fall into the tiered reopening system. Governor Newsom has not yet released theme park reopening guidelines, a contentious issue in recent days, particularly among the Governor’s office and Disney officials who are “ready to reopen” Disneyland Park and Disney California Adventure Park.

In addition to reaching certain coronavirus-related metrics, Governor Newsom said today that he would like to see “more stability in terms of data,” specifically in counties where theme parks are located throughout the state of California.

But still, the Orange County Health Care Agency has recommended that Disneyland Resort be allowed to reopen when it is moved to the “Moderate” Orange tier.

What would a move to the Orange tier mean for Disneyland?

The move to the Red tier positively impacted businesses in the Downtown Disney District, which was recently able to begin offering limited indoor seating at restaurants. This was not allowed when Orange County was still classed in the most restrictive tier.

The orange tier boosts capacity for churches, restaurants, movies, museums, zoos and aquariums from 25% capacity to half capacity. Gyms and fitness centers could boost capacity from 10% to 25% and reopen pools.

Moving to California’s Orange tier would, at this time, have the most impact on Downtown Disney, since establishments there (including the Disney-owned World of Disney store) have been allowed to start phased reopening processes. It would afford them with the ability to serve more Guests, increase overall capacity, and, perhaps, prove their ability to manage the COVID-19 outbreak the way Walt Disney World Resort has been able to in Florida.

There is, however, a chance that being moved to the next tier would also allow Guests to actually enter the gates of Disneyland Park and Disney California Adventure, at least for a brief time. Yesterday, a Halloween-themed pop-up store inside of DCA was allowed to open to the public, with strict restrictions. It is intended to serve as an extension of Downtown Disney at this time.

What are your thoughts? Should California’s Orange County be moved to the Orange tier soon?

Comments Off on How Will Disneyland Be Impacted as the County Reopens?