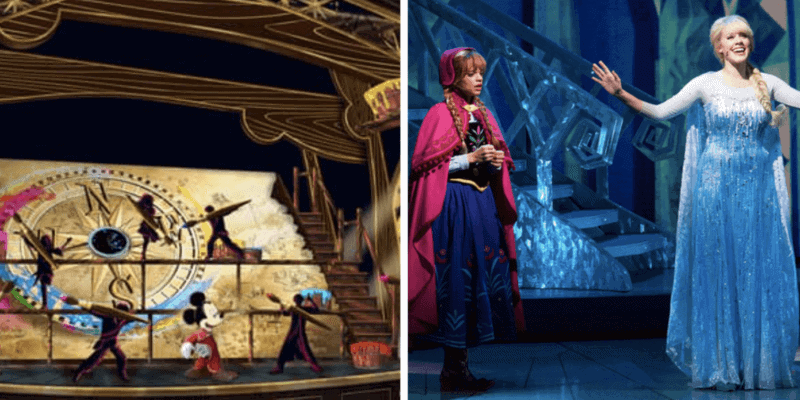 Disneyland Resort has confirmed that both Mickey and the Magical Map and Frozen Live at The Hyperion will be closing as a result of the Anaheim Disney Resort’s continued closure and the uncertainty surrounding it.

End of run notices have been sent to actors in the “Frozen: Live at the Hyperion” at Disney California Adventure and “Mickey and the Magical Map” at Disneyland, according to the American Guild of Variety Artists West.
“We have been told that Disney will be laying off 214 of our members which represents approximately 70% of our members currently employed at the Disneyland resort,” AGVA West Disneyland representative Steve Rosen said via email.
“Frozen: Live at the Hyperion” and “Mickey and the Magical Map” have ended their runs due to the pandemic and continued uncertainty while the parks await reopening guidelines from the state, according to Disney officials.
Related: Stage Entertainment Returns to WDW With &’Frozen Sing-Along’

OC Register continued with these details about the Disneyland show closures:

“At this time, no AGVA members have received layoff notices,” Rosen said via email.
Live entertainment like the “Frozen” and “Magical Map” stage shows that draw large crowds were expected to be temporarily canceled when Disney’s Anaheim theme parks eventually reopen.
It’s still possible “Frozen: Live at the Hyperion” and “Mickey and the Magical Map” could return, according to Rosen.
“An end of run notice means ‘technically’ that the shows are permanently closed, but Disney has sent end of run notices in the past and then subsequently reopened the show.”

The final portion of this paragraph should give Disneyland Park and Disney California Adventure Park fans a glimmer of hope that their favorite live stage shows could ultimately return when Disneyland is allowed to, proverbially, “open up the gates.”

At this time, Walt Disney Company officials are locked in a tense battle with California Governor Gavin Newsom regarding reopening. Neither Disney Parks nor Universal Studios agreed with the Governor’s reopening guidelines, so it is back to the drawing board at this time.
Governor Newsom recently stated that the state is in “no hurry” to reopen theme parks.
Do you hope Mickey and the Magical Map and Frozen Live at The Hyperion will be coming back in the future, or are these live Disneyland shows gone for good?