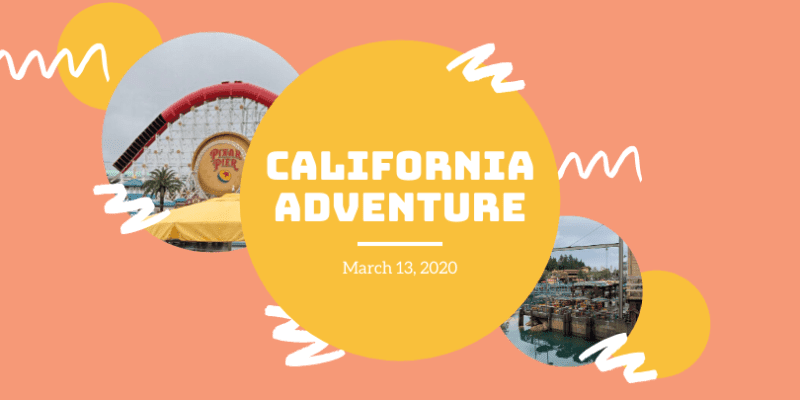 We love Disneyland Resort as a whole, but I’m especially partial to Disney California Adventure park. There’s something about the combination of Old Hollywood, the Pacific Wharf area, and Pixar Pier that strikes a particular chord with me.

Thus, when we planned a spontaneous March 2020 trip to DLR, we decided to “save the best for last” and visit California Adventure on the last day of our stay in Anaheim. Little did we know when we booked that March 13 would be the last day Disneyland Resort would be open for the foreseeable future.

We were at the Golden Horseshoe at Disneyland Park on March 12 when the Disney Parks coronavirus closure announcement was sent to guests’ phones. It was a strange, shocking moment as everyone in the restaurant processed the information (and the severity of the coronavirus pandemic). There was a palpable sense of “if Disney can close, anything can happen” in the air.

After the initial shock had worn off, guests tried to enjoy the remaining day-and-a-half of their vacations (we snagged Rise of the Resistance Boarding Group 37, which improved our day immensely!)

When we arrived at Disney’s California Adventure on Friday morning, crowds were extremely sparse. One of the most noticeably abandoned areas was Pacific Wharf. Even when the weather was dry, the outdoor dining area and most quick service restaurants were empty.

Pixar Pier was also markedly less busy than it typically is, which was bizarre to experience, but made for great pictures with the Incredicoaster and Pixar Pal Around in the background. Always a bright side!

Overall, the last day before the Disney Parks closure at DLR’s California Adventure was a blast. Since crowd levels were so low, nearly all rides had a 0-5 minute wait time. Soarin’ was a notable exception, with wait times over 30 minutes nearly all day. FASTPASS time slots were still easy to get using MaxPass, though.

We were able to sample some of the offerings at  the 2020 California Adventure Food & Wine Festival before the stalls were shuttered for the Disney Parks closure. There were few, if any, people waiting in line at most Food & Wine booths, making it feel almost like a private tasting. We especially loved the peanut butter and chocolate Mickey macaron.

The Frozen show at the Hyperion Theatre was significantly less crowded than normal, making it easy to get great seats. The cast performed incredibly and Elsa gave a special message during curtain call, saying, “After this, the gates will be closing for a little while, but we’ll be back soon to make more magic than ever before!” Guests and the Frozen cast and crew were tearing up.

For our family, the Cast Members were the highlight of the day. They continued to provide exceptional, magical service until the park closed and I cannot thank them enough for making my daughters’ last trip for awhile so special. They never let on that they would not be coming to work the next day and provided the type of service only Disney can all day long.

It was also encouraging to see the safety and sanitation protocols that were in place ahead of the closure. Cast Members swooped in to wipe down tables, handrails, and other high-touch surfaces with antibacterial cleaner every time someone used them. Although we also had our own antibacterial wipes, this was great to witness.

Donald Duck, Dale, and the Elias & Co. team, in particular, sprinkled some extra pixie dust on our final day at DLR until the gates re-open. See ya real soon, Disneyland!

Comments Off on One Day at Disneyland: California Adventure the Day Before the Closure