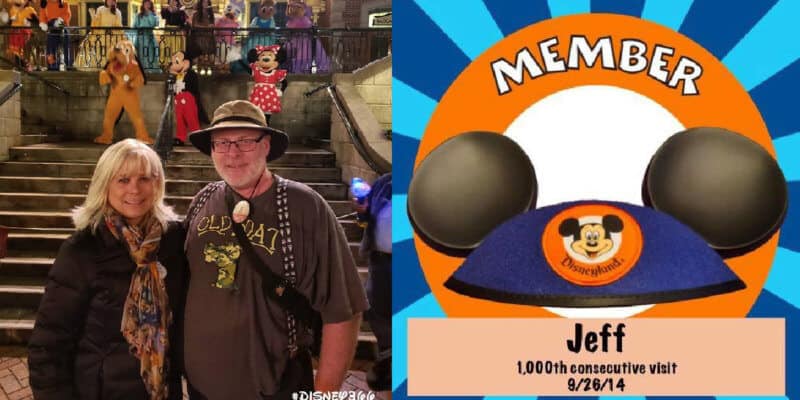 Jeff Reitz is an Annual Passholder that really knows how to get the best for his buck. Every single day since 2011, Jeff has managed to visit Disneyland Resort! With the temporary closure of the park going into effect, Jeff celebrated his 2995th visit to Disneyland and the conclusion of his visiting streak last night.

In a video posted on Jeff’s Facebook, Disney366, Jeff chronicled the end of his almost 3000-day journey:

He also managed to meet the president of Disneyland Resort, Rebecca Campbell, and grab a picture with her!

Visiting The Happiest Place on Earth that many consecutive days is no easy feat. When doing the math, 2995 comes out to 8 years, 2 months, and two weeks. When looking at Jeff’s Facebook, he describes in his “about”:

I have been going to DISNEYLAND every day since 2011, over 2500 consecutive days, and I enjoy taking pictures & sharing the magic of Disneyland. #Disney366

Jeff also chronicles his daily visits on Instagram and WordPress, understandably creating a following of over 30 thousand people on Instagram alone. It’s pretty amazing to scroll through his virtual diary of visits, spanning meet and greets with countless characters, shots of food found in the parks, and even significant events in Disneyland history, such as the opening of Galaxy’s Edge.

Here is a post Jeff made on the opening day of Galaxy’s Edge, where he met Josh D’Amaro, previous President of Disneyland Resort and current president of Walt Disney World Resort!

We hope that Jeff plans on continuing to share the magic of Disneyland once the park reopens in the near future! It’s never too late to begin a new streak of visiting the park again, after all.

If you had the opportunity, would you visit Disneyland, The Happiest Place on Earth, every day as well? Let us know what you think in the comments!