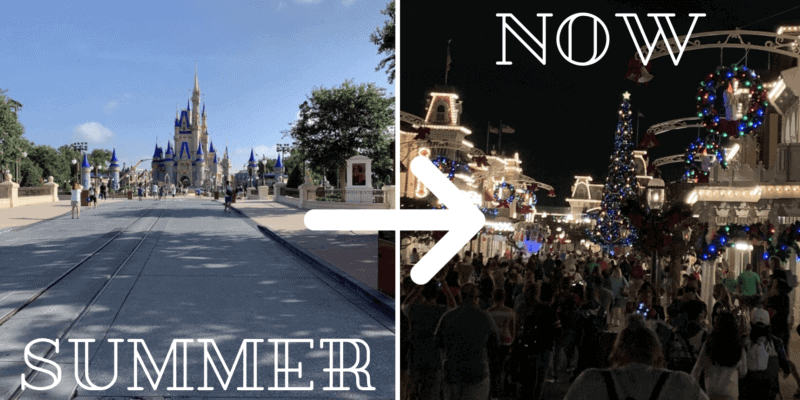 While there were some mixed feelings about the low crowds, the overwhelming majority of early Guests visiting the parks seemed to loved the extremely low crowd levels and the ability to more-or-less walk onto any ride they wanted to.

Now, as Disney World officials move forward — as Walt Disney Company CEO Bob Chapek has confirmed that capacity has already increased to 35% — it’s time to think about whether or not Walt Disney World Resort should ever return to its maximum daily capacity.

Here, we take a look.

During my recent trip to Disney World, there was never a point where I felt unsafe or as if I couldn’t remove myself from a crowd of people.

That said, there were two specific locations where the crowd levels were too much for my personal comfort — both of these, as you will see, were near socially distanced queues that were significantly longer than they would normally be.

Fortunately, it was not difficult to get out of those two areas quickly. Furthermore, even in these throngs of people, face masks were being worn and Cast Members were actively encouraging Guests to move along and space themselves out.

The first line that was causing excessive crowding was for Millennium Falcon Smugglers Run at Star Wars: Galaxy’s Edge in the Disney’s Hollywood Studios theme park.

The line wound all the way through the Star Wars themed land, making it challenging for Guests who were simply trying to navigate Batuu to not walk too closely to the Guests waiting in line for Smugglers Run.

A similar situation occurred near “it’s a small world” at Magic Kingdom park. Due to both ride renovations and socially distanced queuing, the line for the popular attraction is largely outside on a major walkway at this time.

Due to this, it was challenging for Guests to navigate around the line without causing crowding. The close proximity of Peter Pan’s Flight across the path wasn’t helping the situation.

This issue will likely be improved somewhat when “it’s a small world’s” refurbishment is completed.

It is worth noting that all other areas of the parks looked like the Hollywood Studios path pictured above. Overall, I could not have been more impressed with how Disney handled crowding. However, the two issues we did encounter bring to light just how much myself and many other Guests believe that FastPass+ needs to return if Disney is to continue increasing capacity whatsoever.

If there are no plans for FastPass to come back in the near future, I suspect that an expanded virtual queue system — similar to the one used for Star Wars: Rise of the Resistance, which had no crowding whatsoever — may need to be implemented in order to avoid Disney World’s parks being overtaken by socially distanced ride and attraction queues.

Related: Did Josh D’Amaro Just Confirm That Disney Is Moving to All Virtual Queues?

Some parts of the Guest experience are improved at limited capacity.

From a business standpoint, Disney Parks fans understand why Disney’s maximum park capacity is as high as it is — magic aside, The Walt Disney Company has to turn a profit.

However, Disney also frequently speaks on the importance of the overall quality of the Guest experience at Disney World, Disneyland, and their other parks around the globe. In my experience, numerous parts of our visit were actually improved by the limited capacity, making me want to return to Disney World even more.

Although we chose to only eat indoors on one occasion this trip, I’m so glad we did! The Grand Floridian Cafe went above and beyond to make Guests feel completely comfortable during their meals.

The only table near us with another party [pictured below] was across the dining room, far more than six feet away. Many tables are not in use at this time, which makes for a more pleasant dining experience overall.

If Disney World returns to full capacity and table service restaurants go back to being fully booked, some of the magic of the current experience — which feels quite personalized and intimate — is sure to be lost.

We’ve all ridden an incredibly crowded Disney World monorail train first thing in the morning. While the experience of riding with so many other Guests isn’t exactly unpleasant, it’s much nicer to have a whole car designated only for your party.

Not only did we feel much safer having our Monorail vehicle just for us, but we were able to full enjoy the views from the train and feel fully immersed in the magic of the ever-popular transportation system.

The Disney Skyliner experience was also incredible thanks to the Florida Disney Resort’s current capacity limitations and social distancing measures.

We thoroughly enjoyed having our Skyliner gondolas all to ourselves every time we rode! The entire Disney experience feels more special when you are sharing it only with your loved ones.

So, what’s the verdict?

I, like many others, believe that very sparse Walt Disney World parks should not be the norm. After all, part of the fun is the community of Disney fans from around the world gathering together to enjoy the magic that only Disney’s flagship theme park property can provide.

However, remaining at around 50% capacity for the long run — and continuing to utilize the Disney Park Pass system beyond early 2022 — seems like the perfect combination of crowds and the ideal Guest experience.

What are your thoughts on Disney World capacity? Tell us in the comments!