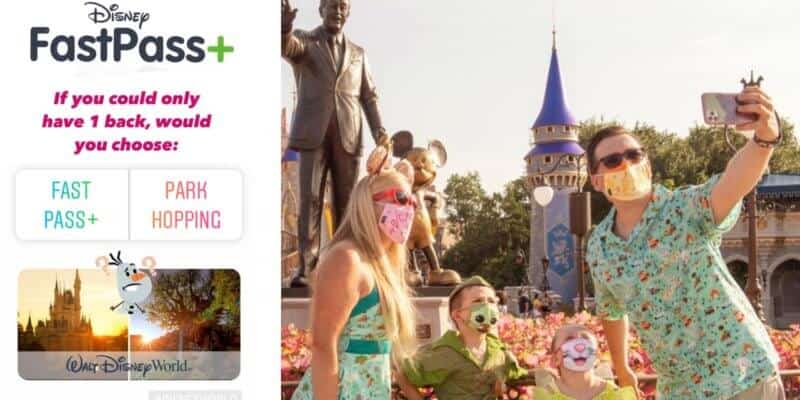 Yesterday, we at Inside the Magic posted a poll to our Instagram asking you all, if you HAD to choose, would you bring park hopping or FastPass+ back to Disney World?

Well, Disney lovers, the votes are in and it was a close call. Before we get to the winner, let’s take a look at the pros of each option and why it would be magical to have them back as an option when visiting Disney. Trust us, if we had it our way, we would love to see both park hopping and FastPass+ safely reinstated into Disney World parks — but when it came down to it, you all had one superior option.

Fast Passes can often take your Disney World vacation from, “Wow can this get any better?!” to “Oh my gosh, it can!”. By being able to skip the 75-minute line for Slinky Dog Dash at Disney’s Hollywood Studios, or breeze past that 2-hour line for Seven Dwarfs Mine Train at Magic Kingdom, you are saving time that can be used to explore more of the Disney parks!

FastPass+ is also a tool that makes planning your next Walt Disney World visit exciting! Prior to the closure, Guests could book their Fast Passes 60 days prior to their park arrival date. This only adds to a Guests excitement and reminds them that their Disney vacation is around the corner. I personally would always get excited at the 60-day mark, logging into my My Disney Experience App at 7:00 AM to get ready to snag the best passes for my friends and me.

Plus, waiting in long lines in the Florida heat is no joke, and being on your feet from park open to close can get exhausting –– FastPass+ helps you combat all of the more tiring aspects of visiting Disney World!

On the other hand, we are also missing park hopping. Prior to the closure, Guests could start their Disney day with Peter Pan and Splash Mountain at the Magic Kingdom, stop in Batuu (Star Wars: Galaxy’s Edge) and Disney’s Hollywood Studios for lunch, spend the afternoon on Kilimanjaro Safaris at Disney’s Animal Kingdom, and then cap everything off with dinner at EPCOT. Being able to park hop at Disney is a must because it allows you to never feel like you have exhausted the theme park you are at.

All Disney theme parks are magical, and I would gladly stay at any of them from park open to close, but if I could rope drop Magic Kingdom, then go back to my Disney Resort, pop in the pool, and swing by Hollywood Studios to catch Fantasmic!, well that sounds like the perfect day to me.

Also, for any Annual Passholders, it is unfortunate that we have lost park hopping since part of the value of the pass comes from the fact that you can park hop. Park hopper tickets are more expensive than a single day ticket, so being able to access any park is a definite perk of the pass that is no longer useable.

As I write this article, the poll on our Instagram is still live, however, there has always been one contestant in the lead.

And the winner is — drumroll, please… — PARK HOPPING!

Although it is still a close call, and many Disney Guests would love to see FastPass+ return to the parks, 59% of you would like to see park hopping return. And in case you’re wondering, I voted for park hopping as well Insiders!

Which is more likely to come back?

If you ask my opinion on this, I do not think we will see park hopping back at the parks until capacity is no longer an issue. With the Park Pass Reservation system in play, it would be much too difficult to reserve 2 parks in one day without doubling capacity, unless you had specific time slots to enter the parks.

FastPass+ however could possibly return while parks are at capacity! Again, this is just my observations, but with plexiglass going in all queues, it is now much safer to run 2 lines together again. With lines growing at the Disney Parks due to demand and social distancing in queues, FastPass+ could help correct some of these issues.

For now, we are just glad that we are able to step into the magic and see Mickey Mouse! And if you want to visit today, chat with Academy Travel to start planning your next Disney vacation.

So what do you think? Should Disney bring back FastPass+ or park hopping?