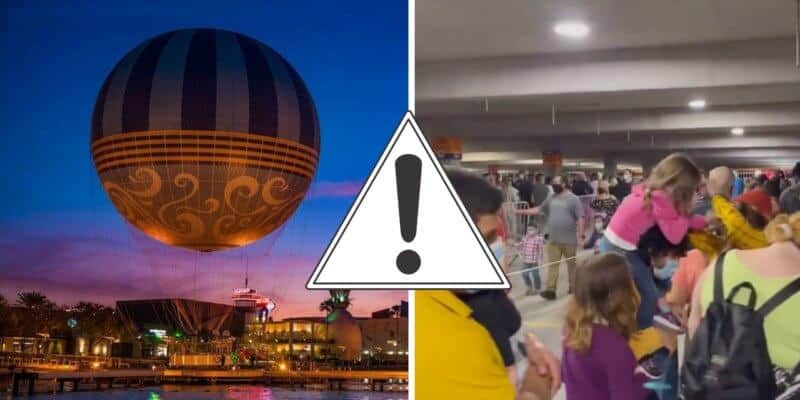 It’s no question that Walt Disney World has been busy this Thanksgiving holiday weekend, but who knew the that the longest line some Guests would be standing in was the one to get into Disney Springs?

Inside the Magic has been hanging out at Disney World this holiday weekend, and there have definitely been crowds. All four parks — Magic Kingdom, Animal Kingdom, EPCOT, and Disney’s Hollywood Studios — have been at capacity with many  attractions holding hour waits. That being said, when all the parks are full, you can always try to go to Disney Springs and see if that is at capacity since it is first come first serve.

It seems that yesterday evening, at the entrance point to Disney Springs, Guests were experiencing longer than normal wait times with 2-hour lines from the moment they entered the parking garage. On Twitter, Dermatophyte said:

@WaltDisneyWorld you are putting your Disney Springs customers at risk from a mass shooting by only providing one entry point and no metal detectors so we can get our temp checks at entry. We waited 2 hours to park and get in, ridiculous

@WaltDisneyWorld you are putting your Disney Springs customers at risk from a mass shooting by only providing one entry point and no metal detectors so we can get our temp checks at entry. We waited 2 hours to park and get in, ridiculous! pic.twitter.com/i0fC69G41y

Although Disney Springs never had a security check before the pandemic, they do now have temperature checks. The temperature checks take under 2 seconds, but it seems that it is clearly creating a large back-up. If we see the video above, the queue looks busier than Avatar Flight of Passage typically does! It should be noted, this is also the crowd from Black Friday. With Disney Springs being the ultimate shopping center at Disney, many shoppers may have wanted to check out what deals were available.

KarmaKutz also posted a photo with a nervous face emoji after showcasing the massive lines to enter Disney Springs.

This is not the first time recently that Tweets have indicated Disney Springs is facing massive crowds. Although it has not been announced that Disney Springs’s capacity has increased along with Disney World’s theme parks, it seems possible from what we have seen on social media recently. Personally, I find Disney Springs busier than any Disney Park, which is supposedly at 35% capacity at the moment from what has been publicly announced by Disney.

Do you think Disney Springs crowds are overwhelming? Or do you continue to visit?