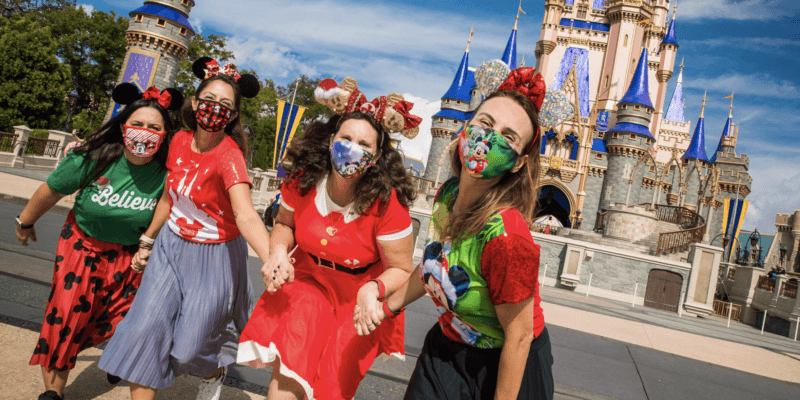 Operating a theme park — let alone six theme parks around the world — in an ongoing pandemic is no easy task. There is no playbook for The Walt Disney Company and other theme park operators to follow.

On this week’s fourth-quarter earnings call, Disney CEO Bob Chapek confirmed that Walt Disney World Resort in Florida, which began its phased reopening on July 11, has increased capacity at all four of its theme parks — Magic Kingdom, EPCOT, Disney’s Animal Kingdom, and Disney’s Hollywood Studios — to 35% of the maximum possible capacity.

One of the major stories surrounding this was that Chapek recently stated Disney would not be increasing the capacity of Disney World’s theme parks until CDC guidelines significantly changed. Yet, within one month of the Disney CEO making that statement, capacity at the Florida theme parks had increased with no announcement from Disney World officials.

Amid this announcement, Guest offerings are also expanding in California. Disney is preparing to partially reopen Disney California Adventure theme park at Disneyland Resort this week on November 19. Although California Governor Gavin Newsom’s theme park reopening guidelines do not yet allow rides and attractions at Disneyland Park or DCA to reopen, holiday shopping and dining will be available to Guests throughout the festive season. Buena Vista Street in DCA is going to be considered an expansion of the already-open Downtown Disney, for this reason. The DVC villas at Disney’s Grand Californian Hotel & Spa are also opening on December 6.

The elephant in the room regarding all of this is the fact that COVID-19 cases are rising throughout the nation. Here, we explore what is happening in Florida and California — and what possibly could have caused Disney to decide to increase capacity at their theme parks in Florida and open more of Disneyland Resort in California.

What is the COVID-19 status in Florida?

A November 12 Orlando WFTV 9 article outlines what is currently happening in the state of Florida, where Governor Ron DeSantis lifted restrictions on theme parks in September.

Coronavirus restrictions were lifted in Florida roughly six weeks ago. The task force report said it has “seen significant deterioration in the sunbelt as mitigation efforts were decreased.”

The report details what the Task Force is calling “a resurgence in community spread,” saying mitigation efforts need to be reinstituted.

Over the last few days, the Florida Department of Health has recorded a high number of new cases day after day.

Orange County [where Orlando and Walt Disney World Resort are located] ranked third for the county with the highest number of new cases. This week, it fell to fourth.

The report states that community spread is silent and 78% of Florida counties have moderate or high levels of community transmission.

It is worth pointing out that Disney World has restrictions in place — mandatory face masks for all Guests aged 2 and over, social distancing protocols, and other safety measures — that are not enforced in private residences.

As the holiday season approaches, private gatherings are a major concern for state governments around the nation.

With a population of about 21.5 million [in Florida], about one in 25 people in the state have now been infected. That number is closer to one in 31 nationally and one in 147 worldwide.

Disney World and health officials maintain that no known coronvirus outbreaks have been tied to Walt Disney World Resort’s theme parks and hotels.

What is the COVID-19 status in California?

Although the State of California has significantly stricter COVID-19 restrictions than Florida — and, as we noted earlier, the hotels and theme parks of the Disneyland Resort officially remain closed — the fact that the Downtown Disney District and Disney California Adventure’s Buena Vista Street will both be welcoming Guests as of this coming Thursday is intriguing.

The Walt Disney Company, as most Disney Parks fans know, has been locked in a tense and heated battle to reopen in the state of California. Disney executives — including Executive Chairman Bob Iger and Disneyland President Ken Potrock — have repeatedly asserted that Disney has proven its ability to operate theme parks safely in a pandemic environment.

California, which this week announced its 1 millionth Covid-19 case, is seeing the fastest rate of increase in the number of daily reported infections since the start of the pandemic, public health officials said Friday.

There has been a 47.1% increase in the number of new cases in a one-week period since the beginning of this month, according to Dr. Erica Pan, who is currently serving as the state’s acting public health officer.
“This is almost a 20% faster rate of rise and the fastest rate of rise we have seen in California,” Pan said. “When cases are increasing at this pace, it is really important for us to act quickly.”

“Cases are on the rise here in California and we are concerned,” California Health and Human Services Secretary Dr. Mark Ghaly said. “As I say to my patients often, ‘When I’m worried, I’ll tell you so you can worry with me,’ and we’re there.”
Ghaly expressed his concerns over the increase of cases leading to hospitalizations. “About two weeks after a set of cases is reported, we see about 12% of those cases end up in the hospital,” he said. Hospitalizations in the state have increased more than 30% in the past two weeks.

Dr. Ghaly recently stated that California officials are deeply concerned about private gatherings for the upcoming Thanksgiving and Christmas holidays.
With coronavirus cases rising this way, it seems likely that Disneyland Park and Disney California Adventure park will not reach the “Yellow” tier and be able to reopen for a significant amount of time.

So, what is Disney’s reasoning?

The fact that Disney has decided to allow more Guests into their theme parks as COVID-19 cases surge is interesting. In part, this decision is likely due to the fact that Disney has full faith in their own health and safety measures — as we noted earlier, they have stated time and time again that they believe their protocols are proven to be working.

Furthermore, although coronavirus cases are rising, deaths are down. The fact that the severity of the virus seems to be lessening and hospitals are becoming better at treating COVID-19. As NPR reports:

…[there has been] a sharp drop in mortality among hospitalized COVID-19 patients. The drop is seen in all groups, including older patients and those with underlying conditions, suggesting that physicians are getting better at helping patients survive their illness.

In addition to all of this, people are visiting Disney Parks and Resorts. Downtown Disney has reached capacity on multiple occasions and Disney World — even with its increased capacity — is almost sold out for the holiday season.

Pfizer’s vaccine progress has also provided hope for both Disney Parks officials and Disney fans. In the earnings call, CEO Chapek noted that the company feels the future is bright, particularly if this medical breakthrough continues to go well.

What are you thoughts about Disney increasing capacity amid the spike in COVID-19 cases? Do you agree with their decision to “live and let live”?