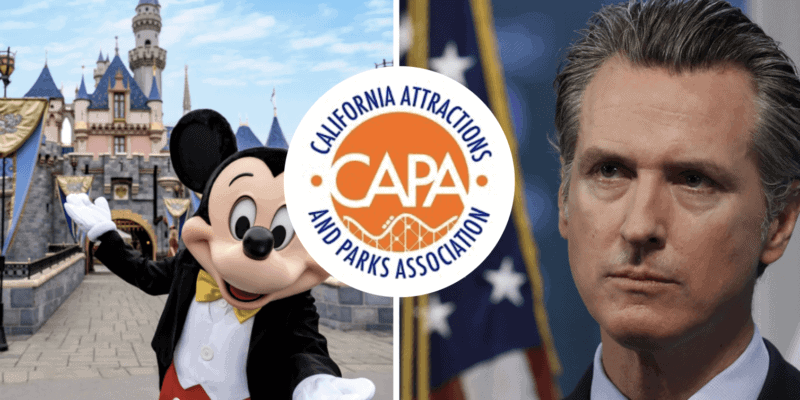 Earlier today, California Governor Gavin Newsom once again addressed his state’s theme park reopening guidelines, which have been a source of much consternation among theme park executives, fans — specifically Disney Parks fans — and other organizations related to the amusement park industry.

Now, the California Attractions and Parks Association (CAPA) has issued a response to Governor Newsom’s comments, which included specific — yet veiled — references to Disney:

….And so, respectfully, deep respect because I understand, again, as someone with four young kids, the reverential identity they have with one particular brand that you are identifying and their desire to be entertained and their desire of those that desire of those that rightfully want to get their jobs back and to get back to some sense of normalcy. Forgive me, but we as a state are going to be driven by data and science, and we’re going to be driven by public health first.”

CAPA’s response was reported in an OC Register report this afternoon:

“Parks have been opened throughout the country and world for months and we have seen no data indicating that COVID outbreaks are being traced back to theme parks,” California Attractions and Parks Association executive director Erin Guerrero said in a statement. “If they can reopen safely in other states and countries, then why not in California?”

Recently, Disneyland President Ken Potrock stated that Disney, too, is driven by a scientific approach; this is something Disney Parks officials have stood by throughout the phased reopening of all of their theme parks around the world.

It is also an issue CAPA addressed in their statement to Governor Newsom. OC Register wrote:

CAPA took issue with Newsom’s suggestion that Disneyland, Universal Studios Hollywood and other California theme parks would not take a health-first approach to reopening based on data and science.

“We continue to ask the administration to share any data or science related to theme parks that they are using to inform their decision to keep the major theme parks closed indefinitely while allowing similar venues to reopen,” Guerrero said in a statement.

Ultimately, it seems as though Governor Newsom is not willing to bend on his existing theme park reopening guidelines, which require large parks like Disneyland Resort to operate at 25% capacity only after their counties — Orange County, in Disneyland’s case — have reached the state’s “minimal” yellow COVID-19 tier.

At this time, the Downtown Disney District has begun its phased reopening and Disney California Adventure’s Buena Vista Street is set to partially reopen next month.

What are your thoughts on CAPA’s response to Governor Newsom?