Dave Filoni: Rian Johnson Convinced Me to Do Live-Action - Inside the Magic 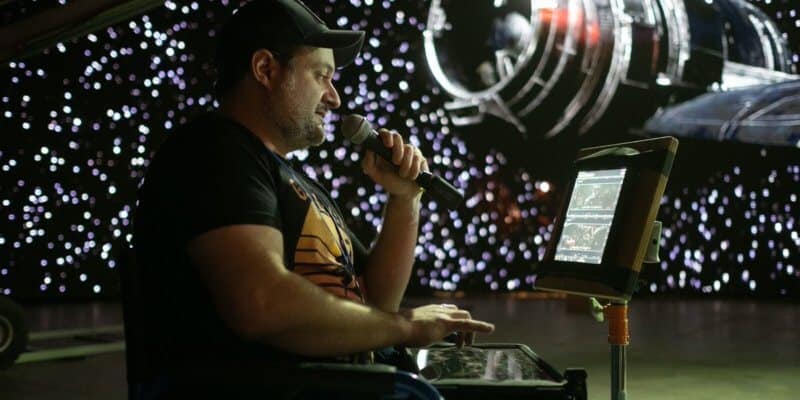 Dave Filoni — who many Star Wars fans have deemed the “savior” of the Star Wars universe — and Rian Johnson — who remains maligned by much of the fandom for Star Wars: Episode VIII – The Last Jedi (2017) — seemingly couldn’t be more opposite, at least from fans’ viewpoints.

Yet, in The Art of Star Wars: The Mandalorian book, Filoni indicates that he likely would not have even ventured into live-action if it weren’t for Johnson’s support and mentorship.

O.G. Starwars shared a photo of a key passage from the Star Wars coffee table book on Twitter:

But, Filoni’s greated education as a live-action director may have come on the set of Star Wars: The Last Jedi in early 2016. Filoni recounted that “[director] Rian Johnson had me right up next to him with the camera. He shoved lenses into my hand and said, ‘Look through here’. He would bring me along to show me how to block a scene. Rian was so supportive of my interest in doing live-action, as was his producer, Ram Bergman. They really made me feel like this was something that I could do.”

Looks like Filoni was inspired and influenced by Rian Johnson ? pic.twitter.com/mtk0rahY37

Before The Mandalorian became a smash hit on Disney+, Filoni was most famous for the animated series Star Wars: The Clone Wars, which introduced the Star Wars fandom to fan-favorite Ahsoka Tano who was voiced by Ashley Eckstein and later portrayed in live-action by Rosario Dawson.

What’s next for Filoni and The Mandalorian?

The Mandalorian has taken pop culture by storm — star Pedro Pascal even recently said the show is “so much bigger than all of us” as it continues to redefine the Star Wars universe.

When the Skywalker Saga ended with Star Wars: Episode IX – The Rise of Skywalker (2019), many fans didn’t know where Star Wars would go next. They found their answer when Mandalorian Season 1 debuted on November 12, 2019.

Now, proving that live-action is really working out for him, executive producer Filoni is set to helm two Mandalorian spinoffs — Ahsoka (featuring Star Wars Rebels and Star Wars: The Clone Wars Ahsoka Tano played by Rosario Dawson) and Rangers of the New Republic — with series creator and showrunner Jon Favreau.

The trio of series are set to culminate, at some point, with some sort of Disney Star Wars crossover streaming event, although additional details have not been provided. It is possible that Favreau and Filoni could be helming a live-action Clone Wars special featuring characters from the popular animated series — both the aforementioned Tano and Bo-Katan Kryze (Katee Sackhoff) have appeared in live-action for the first time in this season of The Mandalorian.

Additionally, Grand Admiral Thrawn — perhaps played in live-action by voice actor Lars Mikkelsen — is expected to appear in Ahsoka when it debuts at Christmas 2021.

The duo has returned the franchise to its authentic, character-driven origins and, as Lucasfilm President Kathleen Kennedy shared at the 2020 Walt Disney Company Investor Day event, have “ushered in a new era of Star Wars.”

As for Johnson, his future in a galaxy far, far away is murky at best following the backlash that The Last Jedi received — Rose Tico actress Kelly Marie Tran even went to therapy following toxic reactions to her portrayal.

A Johnson-helmed trilogy was announced in 2017 and, while it has not been officially scrapped by Disney and Lucasfilm executives, it was not mentioned at Investor Day and no new details have been provided since a rumored plot line was leaked in June 2020.

What’s next for Johnson and Star Wars?

Now, it seems that Rian Johnson’s trilogy could have completely changed from its original form and he could be involved in Patty Jenkins’s upcoming Star Wars: Rogue Squadron (2023). Details about Johnson’s next Star Wars project — if there is a next project — have not been confirmed at this time.

Regardless of how fans feel about Johnson and the story of The Last Jedi, or if he has a hand in any upcoming work, fans will now know they are watching his influence every time they enjoy some of Filoni’s live-action Star Wars work.

What do you think about Dave Filoni saying that Rian Johnson is the reason he felt confident enough to try a live-action series?