“Disney Adult” Disregards Rules, Climbs Into Fountain For Instagram Moment - Inside the Magic 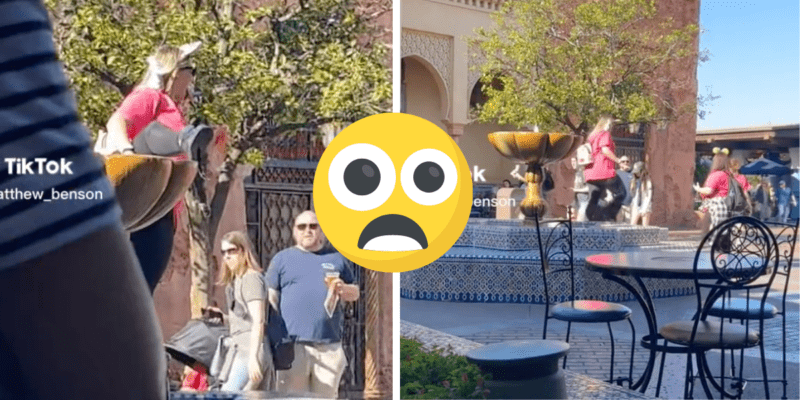 In 2022, we reported numerous incidents of Guests climbing into restricted fountains at Hong Kong Disneyland, Disneyland Paris, Walt Disney World Resort, and more. Some Guests dipped their toes in the water, while others climbed all the way in for a photo op.

Another disturbing 2022 trend saw Guests “cooling their dawgs off” on “it’s a small world” and Splash Mountain. TikTokers would take their shoes and socks off and dip their toes in dirty ride water for internet clout.

Unfortunately, one EPCOT Guest decided to bring that trend into the New Year. @matthew_benson shared this video on TikTok:

“Literally, why?” the Guest asked as he watched a woman climb into a fountain in the Morocco World Showcase Pavilion for a photo op. He also jokingly referred to the Guest as a “Disney Adult.”

Many Disney fans feel “Disney Adults” like this Guest shine a negative light on the community. Because of negative viral incidents like this one, “Disney Adults” have been the target of relentless harassment, such as one woman who shared a video of herself hugging Pluto for the first time since the start of the COVID-19 pandemic.

Regardless of your thoughts on “Disney Adults,” Disney Parks attraction and fountain water is not treated as drinking water and should not be consumed. It’s also not treated as pool water, so it’s definitely not safe to swim in. Even on those hot Central Florida days!

Have you ever seen anyone step in a fountain at Walt Disney World Resort?