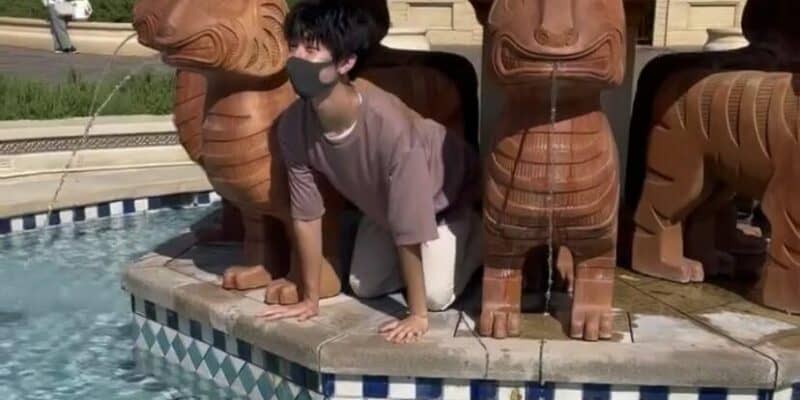 Recently, a guest described as having “no morals” decided to make their way into a fountain today at Disney, for an unsanctioned video and photo-op.

As the Disney Parks try to bring more Guests in for the summer, over in the Arabian Coast “Port of Call” in the Tokyo Disney Resort’s Tokyo DisneySea, a Disney Park Guest was spotted climbing over the fountain in the middle of the themed land — extremely out of the norm for the usually rule-abiding Guests at the Tokyo theme park.

The fountain in question is situated right in front of the Aladdin and Genie-themed Attraction, Magic Lamp Theater.

The Guest, identified as @kkkazzzz on Instagram, had their buddy video them climbing into the Arabian Coast fountain and crouching, posing among the statues of the central water feature. A Tokyo Disney Resort Cast Member then comes over to warn the misbehaving Tokyo DisneySea Guest and asks them to leave the fountain.

Please be aware that a guest with no morals has entered the park today.

Japan is known for their strict, unspoken rules of social conduct, where disrespecting and inconveniencing others is one of the worst things one can do. Politeness to strangers and going out of one’s way to respect others’ boundaries is absolutely paramount in Japanese society, and “selfish” or “egoistic” acts like this are severely frowned upon.

As a result, local Japanese Disney fans have not taken kindly to this news at all, resorting to calling this person out online.

User @KM1514Brook has decided to publicly “name and shame” the Tokyo Disney Resort and Tokyo DisneySea Park Guest with a screenshot of their Instagram, not allowing the rude Guest to get away:

If you’re intending to escape by locking [your account], then I want you to have common sense and manners

📢 Notice: Your Life is Over

While @9151Abc expresses their upset, hoping for stricter measures against misbehavior in Disney Parks:

Don’t just warn these kind of delinquents lightly, it’s better to take actions to fully ban + have security forcefully escort them out…

I mean, are young people these days only idiots?

All of this critique is certainly warranted, as the purpose of the Disney Parks is to serve Walt Disney’s vision of creating the Happiest Place(s) On Earth — and treating every theme park and the public spaces within them as solely existing for your own happiness and no one else’s is selfish. Similarly, over in the U.S there’s been a trend of Guests going barefoot in the Disney Parks recently, at both California Disneyland Resort’s Disneyland Park and Florida’s Walt Disney World alike — all of this rule-breaking for online clout seems to be on the rise.

Some might say that the young Guest was only playing around, and that the internet and other Disney Park fans ought to give him a pass — however his crossing of the boundaries laid out by Disney, which exist for a reason, might have resulted in the Guest falling into the fountain, or even damaging a part of the Land.

Tokyo Disney Resort fans however, are definitely not going to let this lie.

What do you think of this “no morals” Guest? Do you think the upset is justified? Share your thoughts in the comments below!

When it arrives next year, Park Guests will enter Fantasy Springs through an enchanted waterfall grotto, that opens into a magic-filled Port where Guests can find themselves visiting Peter Pan’s Neverland, Rapunzel’s Tower and Kingdom of Corona, and Anna and Elsa’s Arendelle: World of Frozen — potentially even check-in at a luxury hotel connected directly to Fantasy Springs itself.