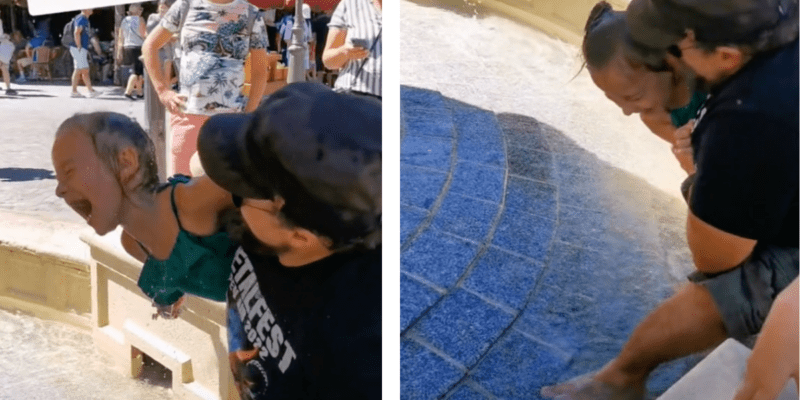 Inside the Magic has reported on dozens of incidents of poor Guest behavior at Disneyland Paris. From Guests trespassing into restricted areas to rest to a child climbing ten feet up a light post for a better view of Sleeping Beauty Castle fireworks, stories of rule-breaking are plentiful in France.

This week, @tespoischich on TikTok shared a video of a man playing with his daughter at Disneyland Paris. Though it’s a heartwarming video, it takes a turn when you realize the Guest is standing barefoot in a decorative fountain to dunk his daughter in the water:

The Guests didn’t share the video maliciously or try to start a trend. They were enjoying a magical moment on their vacation and weren’t stopped by Disney Cast Members. However, fountain water isn’t treated for human contact, and it’s best to avoid drinking or playing in Disney Parks fountains.

If you’re headed to France for a vacation at Disney Hotel Santa Fe, Disney Davy Crockett Ranch, Disney Hotel Cheyenne, Disney Sequoia Lodge, Disney Newport Bay Club, or Disney Hotel New York – The Art of Marvel, be sure to read the Resort’s guidelines before heading to the Disney Parks:

2.1. Visitor Behaviour: Theft, public disorder, verbal and physical violence, insults or racial taunts, cheating, fraud, drunken or indecent behaviour, malevolence, violations of safety regulations and these Park access rules, discriminating or other socially unacceptable behaviour, may lead Euro Disney Associés S.A.S. to take the necessary action including informing the police, filing a complaint or removing the visitor from the Park(s) without any sort of compensation, refund or claim.
For safety reasons, reckless running is not allowed.
For the safety, comfort and enjoyment of all visitors, please keep the Parks and their facilities clean.
Backstage areas of the Parks and fenced-in areas are not accessible to visitors.
It is forbidden to take pictures with flashes or film with lights in the attractions and shows.
Group picnics which require specific equipment (cool box, stove, folding tables, and containers) are not allowed inside the Parks. For your convenience, a specific picnic area is located between our parking lot and the Park entrance. The use of outdoor restaurant tables is open to all visitors, with priority given to visitors who have purchased food in the Parks.
For the safety and comfort of all, we ask that visitors do not eat and drink in the attractions, the theatres, or their queue lines.

We advise our readers to follow Disney Parks rules and listen to all directions from Cast Members when visiting Disneyland Paris or any Disney Park.