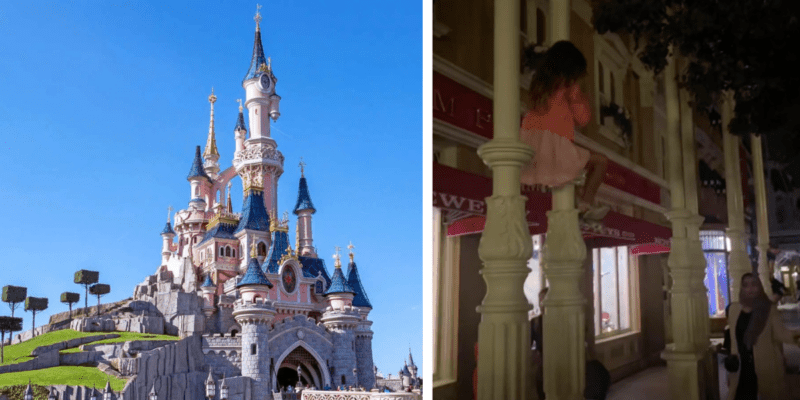 It’s common for Guests to break the rules at any Disney Park, but like Walt Disney World and Disneyland are now becoming known for the recent “dress coding” trend, Disneyland Paris is now slowly becoming known online for bizarre photos of Guests violating Disney Parks guidelines.

Some of these photos are nothing new, like a child riding a banned scooter through Disney Hotel New York – The Art of Marvel and a Guest napping on the grass in a restricted area.

One alarming photo, however, shows a little girl approximately ten feet in the air on a light post on Main Street, U.S.A., at Disneyland Park, likely for a better view of the fireworks over Sleeping Beauty Castle. It looks as though no adults are paying attention to the little girl to catch her if she falls.

Other photos in the TikTok compilation show various Guests climbing fences and standing in restricted areas for better views of fireworks, parades, and shows.

“People need to think about others… workers work way too hard just for people to come and ruin it,” @iheartkat3 wrote.

If you’re headed to France for a vacation at Disney Hotel Santa Fe, Disney Davy Crockett Ranch, Disney Hotel Cheyenne, Disney Sequoia Lodge, Disney Newport Bay Club, or Disney Hotel New York – The Art of Marvel, be sure to read the Resort’s guidelines before heading to the Disney Parks:

2.1. Visitor Behaviour : Theft, public disorder, verbal and physical violence, insults or racial taunts, cheating, fraud, drunken or indecent behaviour, malevolence, violations of safety regulations and these Park access rules, discriminating or other socially unacceptable behaviour, may lead Euro Disney Associés S.A.S. to take the necessary action including informing the police, filing a complaint or removing the visitor from the Park(s) without any sort of compensation, refund or claim.
For safety reasons, reckless running is not allowed.
For the safety, comfort and enjoyment of all visitors, please keep the Parks and their facilities clean.
Backstage areas of the Parks and fenced-in areas are not accessible to visitors.
It is forbidden to take pictures with flashes or film with lights in the attractions and shows.
Group picnics which require specific equipment (cool box, stove, folding tables, and containers) are not allowed inside the Parks. For your convenience, a specific picnic area is located between our parking lot and the Park entrance. The use of outdoor restaurant tables is open to all visitors, with priority given to visitors who have purchased food in the Parks.
For the safety and comfort of all, we ask that visitors do not eat and drink in the attractions, the theatres, or their queue lines.

Have you seen Guests breaking the rules on a Disney vacation?