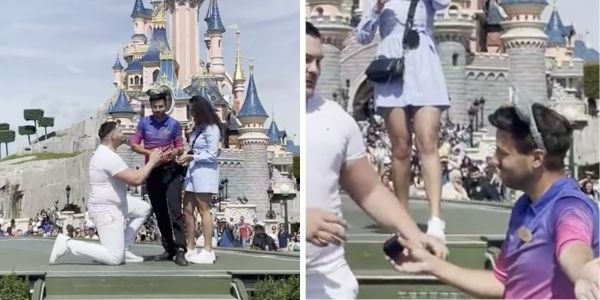 There is no shortage of shocking or surprising things that happen at the Disney Parks. With how popular and gigantic they are, there’s bound to be some sort of commotion, intrigue, or argument happening.

This was true at Disneyland Paris recently, with a bizarre situation unfolding.

We recently covered a video that’s gone viral which shows a couple sharing a very special moment at the Disneyland Resort in Paris. The couple can be seen on a stage in the Park as one GUest gets down on one knee to propose. This sweet and romantic gesture was cut short, however, with a Disney Cast Member quickly swooping in and taking the ring from the Guests. The Cast Member took the ring and motioned for the Guests to leave the stage.

This scene left fans divided online, with some taking the sides of the Guests and others siding with the Cast Member. Now, more information has come out with Disney making a public statement on the situation.

Guests who watched this scene unfold were left confused, some even resulting in booing the Cast Member who interrupted the couple’s special moment. “Yes, that’s great but over here will be even better,” the Cast Member said as they took the ring.

As reported by Newsweek, the original video claimed that a friend “actually asked a female co-worker” if proposing on the platform was OK. “The woman gave him permission, this POS ran up to him and [took] the ring,” the poster said.

After the video went viral Disney made the following statement:

We regret how this was handled,” the Disney spokesperson added. “We have apologized to the couple involved and offered to make it right.

This is where the story ends for now. We aren’t sure what Disney offered the couple “to make it right” but we hope it didn’t completely ruin the couple’s intimate moment or stay at Disneyland Paris.