Disneyland Cast Member Speaks on Live Streamers Amid Controversies, Calls For Ban - Inside the Magic 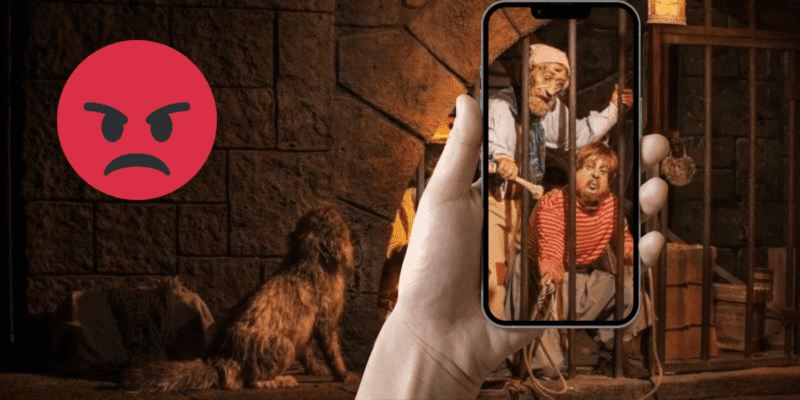 Surprisingly, the former Disney Cast Member had mixed feelings about Disney influencers. While they agreed that certain vloggers and live streamers annoy other Guests, they didn’t feel the practice should be banned.

“I think some of them are overly entitled and should be kept from doing some of the crazy stuff they do. Others are very respectful and I have even met a few who are very kind,” they wrote.

The former Cast Member also pointed out that while some Guests feel being filmed without consent is an invasion of privacy, it’s legal in California to record others in the background: “So even if you are on private property (such as the Disney parks), you are in fact in a public place. And in these public places, photography and videography are allowed.”

I do think many of the vloggers, specifically the TikTok variety, are quite annoying and are definitely creating distractions and doing really stupid things. They really need to keep themselves under control, and not do the types of things we see them doing which ruins the experience for other people. Things like narrating along with the Ghost Host in the Mansion, or being obnoxious in a crowd of people, talking loudly and asking for donations while people are trying to enjoy a show or an attraction. I would hope that these things would get that person spoken to and/or removed from the parks depending on what they are doing and how they are doing it.

Instead of banning live streamers altogether, the former Cast Member hopes that Disneyland Resort will do better about punishing all Guests who break the rules, including influencers.

“I think what will eventually happen, is that streamers will eventually cause so many problems, that Disney will find a way to get them to either chill, or stop them from streaming,” they concluded. “As a private entity, they do have the authority to do that on their property.”

What do fans think?

The former Disney Cast Member thought their post would be controversial, but many Theme Park fans agreed with their opinions. For some, live streamers bring the magic of Disney Parks to their homes when they cannot travel.

“I would love if they just restricted or banned people from engaging in certain live streaming activities if they have shown a history of negatively impacting other guest experiences,” u/forlorn_hope28 said. “There are content creators who are respectful of the parks, and then there are those who clearly aren’t. If you can’t act in a respectful and professional manner, then you shouldn’t be allowed to stream/monetize your activity.”

“This is why the best option is to politely TELL them to not film you directly,” suggested u/holamuneca. “If they make a fuss get a cast member, you’ll be accommodated and they’ll have another person reminding them that they aren’t welcome to do this stuff.”

But others firmly believed that Disneyland Resort and Walt Disney World Resort should ban live streaming and vlogging altogether.

“There’s one on TikTok there EVERY DAY. Charges $5 a month for a subscription, streams on dark rides and uses the disability system to bypass lines,” u/TeslasandComicBooks wrote. “These people should be banned.”

In the last week, two different Disney live streamers have been engulfed in controversy. YouTubers Erik and Charlene of Magically Consumed swiftly deleted a live stream in which they joked about a recent suicide at Disneyland Resort. They both laughed and made jokes about death and jumping while walking through a parking structure where a Southern California principal died by suicide earlier this month.

Hundreds of fans commented on their “disgust” with the video. The couple refused to apologize and said they didn’t expect people to make a connection between their jokes and Christensen’s death. They also attributed the jokes to ongoing issues with their camera equipment.

Also this week, TikToker @thejungleskipper (who boasts 157,000 followers) was accused of yelling nasty things at other Guests to get them away from a Disneyland Park attraction.

“Just witnessed a tik tok streamer go onto the fire truck at night and sing obnoxiously loud so that other guests would leave the fire truck,” a viewer recalled on Reddit. “Apparently he does it every stream and does an inspirational talk on the truck. He waited about 5 minutes and yelled obnoxiously loud about diarrhea so that he could have the truck to himself.”

Once again, hundreds of commenters expressed anger with the TikToker and demanded Disneyland Resort take action.

Related: Here’s When ‘The Jungle Cruise’ Will Be Free On Disney Plus

The new policy bans commercial filming, auxiliary equipment, and “public transmission or recording of any kind that may inconvenience other Guests.” Tokyo Disney Resort already bans filming on rides at Tokyo Disneyland and Tokyo DisneySea, which is one of the strictest Disney Parks policies in the world.

What do you think of live streaming at Disney Parks?