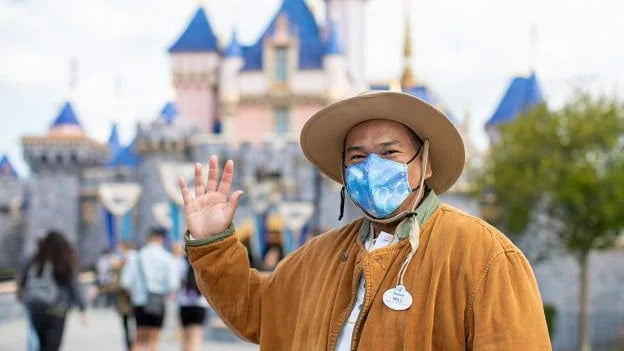 Some Guests recently spoke out about how they felt about being recorded and live-streamed while inside the Disney Parks.

We know that in order to keep Guests and Cast Members safe, many Disney Parks attractions have cameras located inside of them so that Cast Members can keep an eye on Guests and ensure they are following the rules. For example, one time a Cast Member came over the loud speaker on Carousel of Progress to tell the Guests to keep their face coverings on during the entire show. Cast Members were able to see Guests remove their face coverings thanks to hidden security cameras placed throughout the rotating theater.

Again, these hidden cameras are installed to ensure the safety of Guests and Cast Members as thousands of Guests visit the theme parks every single day. But, some Guests are now complaining about being recorded — and not by Disney’s hidden cameras, but by vloggers who are visiting the Parks.

Being recorded by other Guests may upset some visitors as some video footage may be more close up and personal, or potentially could capture embarrassing information.

Of course, this is often not the intent of the Guests filming, but due to the crowded nature of the Parks, it is nearly impossible to capture a shot without any Guests in the background. This was brought up recently online, with Guests sharing their thoughts and opinions.

In a post created on Reddit, one Disney Park Guest brought up their own personal issue with vloggers and live streamers inside the Disney Parks. The user asked others online how they felt about being recorded or captured on video by these streamers.

One user called it “unbelievably rude” while another said that they hate being caught on another person’s vlog. Another said that it was “annoying” to be filmed while in a more delicate setting like at dinner or a show. One user even likened streaming in the Parks to “digital panhandling”. One Guest had someone in front of them record them while in line for over two hours, making for quite an uncomfortable experience.

Unfortunately, there was also a first-hand account from a Cast Member who said that, while they didn’t mind being filmed they have been subjected to embarrassing or rude moments by streamers. The Cast Member claimed that they had been recorded and laughed at while doing their job cleaning up messes which made them feel very bad.

While there was a lot of criticism of vloggers and live streamers in the Parks, some users said they didn’t mind being recorded and expected to be. Another stated that, as long as the streamer wasn’t being rude, they didn’t mind. With all Guests, some visitors may be ruder than others, and a lot of the vloggers visiting the theme parks actually do so as a full-time job. As with anything, please be respectful to others when visiting the theme parks and if you ever have a concern, speak with a Disney Cast Member.

It should also be noted that many Disney fans rely on these videos, whether they are live streams or vlogs at the Disney Parks, to get them through the Disney blues, and to allow them to feel like they are still a part of the magic. These videos can help immerse fans who are not able to be at the Parks at that moment and give them a feeling of being at Walt Disney World.

The videos are also often informative and can help educate those coming on vacation. It also can allow Guests to become more familiar with the Parks, especially if they have never been there before. As we mentioned, many of these content creators want to film Disney and not the hoards of crowds around them, and many do their best to keep others out of their shot so that they can be the focus of their video. Even Disney conducts live streams on their YouTube channel, which often will catch some other Guests in the Parks who are watching a show, or in the vicinity of filming.

What are your thoughts on this issue?