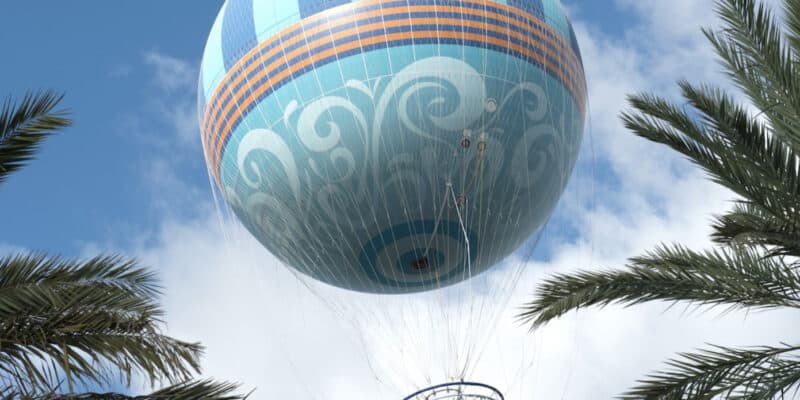 At Walt Disney World Resort, Guests can often expect to experience world-class attractions that are, at times, very thrilling while being filled with stunning detail. Whether you are at Magic Kingdom, EPCOT, Disney’s Animal Kingdom, or Disney’s Hollywood Studios, there will be a ride for everyone to ride. But, did you know Disney Springs has one of the most thrilling attractions yet? Well, this weekend things got a little wilder than anticipated.

Aerophile- The World Leader in Balloon Flight is located at Disney Springs, and is a stunning hot air balloon that hoists Guests up into the air so that they can not only have a beautiful view of the shopping and eating district but Walt Disney World Resort as a whole. The attraction is located on the West Side of Disney Springs and costs $25.00 per adult and $20.00 per child. The ride is used on a first-come, first-serve basis.

On the Disney World website, the following is noted about the balloon:

Soar sky-high during an 8-minute tethered adventure in the world’s largest hand-painted helium balloon. Custom-built for Disney by Paris-based company Aérophile S.A., the Aéro30 is filled with 210,000 cubic feet of helium and ascends to heights of up to 400 feet. The balloon’s basket holds 29 people plus one Aérophile-certified pilot. Each flight offers stunning panoramic vistas up to 10 miles away on clear days, so don’t forget those cameras!

Interestingly enough, the site also notes, “The balloon will not fly during a storm or if winds exceed 22 mph,” however, this past weekend it seems that there may have been a discrepancy in the strength and speed of the wind.

Cecelia Steidinger (@csteidinger) took to TikTok to post a video of the Aerophile- The World Leader in Balloon Flight taking off. As you can see in the video, there are seemingly some Guests aboard the hot air balloon when it goes up. As the balloon rises, things start to become a little shaken, and we can see the wind pulling it in various directions with great force. We can also hear a shriek in the video as the balloon begins moving uncontrollably.

The #disneysprings #aerophile balloon went up this morning and the winds were definetly too fast. #disneyparks #waltdisneyworld #disney #crazy #crazywind #orlando

The #disneysprings #aerophile balloon went up this morning and the winds were definetly too fast. #disneyparks #waltdisneyworld #disney #crazy #crazywind #orlando

In the TikTok, Steidinger noted that the winds were “definitely too fast”. The day prior to this, Orlando saw a storm with 60 mph winds. Those winds calmed down by Saturday, however, it was still quite the windy day, as we can see in the video above. It has not been reported that there were any injuries during this balloon flight, and it seems likely that the Cast Member operating the attraction would have brought it back down to land as safely as possible after the winds were posing as a hazard.

Have you ever ridden Aerophile- The World Leader in Balloon Flight?