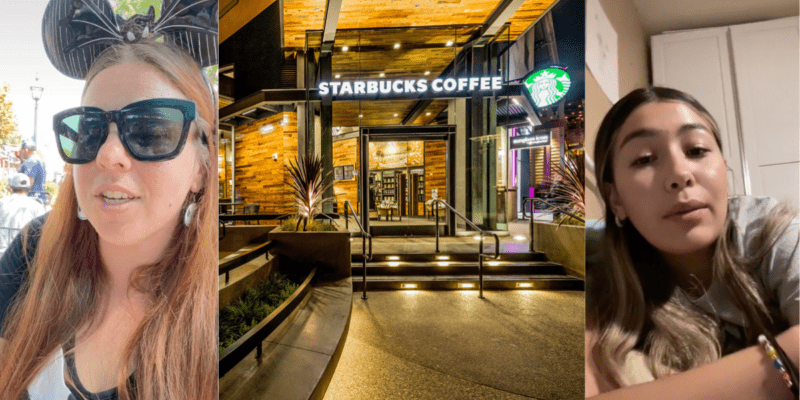 We’ve covered many viral incidents of Disney influencers, “Disney Adults,” and Disney Vloggers disrupting the Guest experience at Disneyland and Walt Disney World Resort. Many Guests feel that just being filmed for others’ social media content is “unbelievably rude” and “annoying.”

However, one Disney Cast Member alleges that a particular so-called Disney influencer is very different once the cameras are off. Kel (@themeparkmom) shared a video of herself after shopping at Downtown Disney. It was later stitched by @arysanatomy, who works at Starbucks:

“Okay, so no hate to that girl or anything, but I met her while I was at work at Downtown Disney,” Ary said. “If you’ve ever been there, you know how busy it gets and how slammed it is there. And we were super, super busy. Our mobile orders were backed up. Our cafe was backed up because we just had a limited staff of people there.”

According to Ary, Kel had a mobile order and asked about it. Ary let Kel know it would be a couple of minutes because they were busy. As Ary was organizing other drinks, Kel allegedly asked, “Is someone even working on it?” in “a rude tone.”

“It honestly just kind of p*ssed me off because, you know, her whole platform is Disney and being kind and all that,” Ary explained.

Ary initially commented on Kel’s video that she had been “mean” but spoke out further after Kel blocked her. Kel claims that she unblocked her to apologize, writing:

In another comment, Kel said she had waited ten minutes for her drink and wanted to know where it was. She later issued a video apology:

@arysanatomy Sorry that I was rude to you. Cast members make the magic and I’m sorry if I made your day any harder than it needed to be.

“I am sorry that I was rude to a Cast Member at Downtown Disney. That wasn’t what I meant to do. I honestly thought I was just asking a question about my order,” Kel said. “However, she made a video saying I was rude, and I’m really sorry if that’s how I came off.”

“This makes me all very sad,” she continued. “Not just because, as everyone’s saying in my comments sections because I’m getting called out for it, but because genuinely, I really love Disney, and I know how hard the people that work there work.”

Thousands of comments said the apology wasn’t enough. “She’s only sorry for how her actions affect her image, not the barista,” an anonymous user wrote.

“LOL! So ungenuine!” @r8aca said. “I don’t think this is her first time either! I think she just got caught up this time 🤷🏻‍♀️,” @tiahnaera wrote.

Please be kind to all Cast Members when visiting Disneyland Resort or any Disney Park.