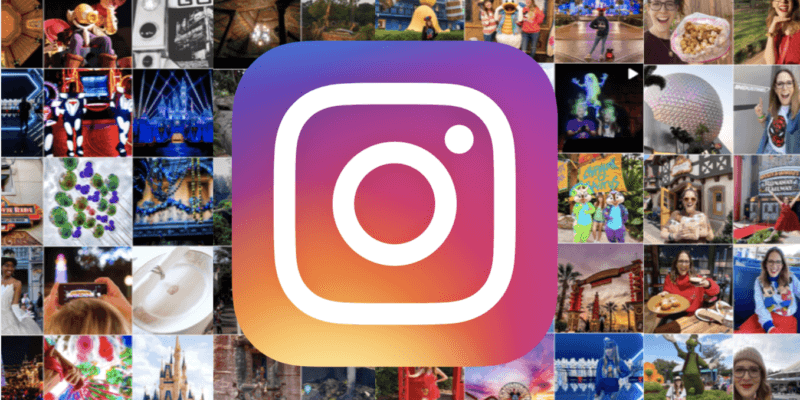 From behind-the-scenes Disney Parks facts to bits of Disney history you’ve never heard before, you can’t go wrong with these Instagrammers.

@JoeRohde is the account of Disney Imagineering Executive Designer and Creative Vice President, Joseph Rohde. Rohde has recently been sharing an amazing series of “backstage secrets” from Disney’s Animal Kingdom, a park he played a major role in designing.

In this Instagram post, Rohde shares that this Shikhar style stupa, familiar to most DAK fans, currently houses much of the equipment for the Rivers of Light nighttime spectacular and sits atop a time capsule that the Animal Kingdom team buried during construction!

Here’s another little area in the park that has some interesting details. This peninsula used to be the absolute end of Asia in the park, before we built Kali River Rapids or Everest. It used to play only to the boats that used to travel around on the river. In a way, this was our promise that someday there would be an Asia at Disney’s Animal Kingdom. The little stupa is very similar to North Indian and Nepalese stupas. It called the Shikhar style. Once again shapes like this are sometimes associated with Hindu and sometimes with Buddhist ideas… We try not to commit either way, but there are steps leading down to the river on the far side which are more typically associated with ritual bathing and Hinduism. Over the years there have been many different utilizations proposed for the space on the peninsula… A water play area, a little dining spot, a character meet and greet spot,… Now it houses quite a bit of the equipment for the Rivers of Light show. By the way, when we were building the park, we put a time capsule under that little stupa. So, someday, it will be time to open it. I think most fans of the park are aware of the other peculiarity in this area, which is the shrine associated with Expedition Everest. This shrine, which is also a composite of styles mimics the silhouette of the mountains and holds a statue of the yeti as a protector spirit. This protector spirit motif is pretty consistent across a huge area. It’s usually a fierce looking being striding sideways, with one arm raised and one extended downwards, sometime holding ritual items or with an open palm. In our case the upraised arm of the yeti is holding the mountain itself. We adopted this motif for the yeti statues because the yeti is perceived in some oral traditions as exactly this kind of protector spirit. There are no real yeti in this pose because of the concept of an avatar. When the yeti is acting as a defender of sacred places it is an avatar of one of the divine protectors of the four directions. They look human. So we worked with Nepalese artists to create a fusion of the two ideas, the actual yeti and the yeti as divine protector. Bronze casters in Kathmandu made the statues.

@CarlyeWisel belongs to, you guessed it, Instagram user Carlye Wisel. Wisel is known for not only her Disney Parks expertise, but her hilarious IG Stories. She’s super relatable and offers great advice for park goers.

Lately, with both Disney World and Disneyland closed until further notice, Wisel has been sharing “Disney at Home” posts (including recipes for Disney food) to help her followers feel closer to their favorite theme parks until the gates reopen.

when ya can’t go to the parks, let the parks come to you!!!!! ???⁣ ⁣ I caved and made my all-time favorite Disney World treat, CARAMEL CORN ??. It’s like they say — “be the Germany pavilion you wish to see in the World a Showcase” ???⁣ ⁣ It’s not as *phenomenal* as Epcot’s, but considering the brown sugar I used from the way back of my pantry was probablyyyy expired, I’m happy with it!! (though your resident makeup-free idiot is now trapped in a home bunker with a gallon-sized bag of caramel corn so maybe don’t take my advice ?)⁣ ⁣ I couldn’t find an official Karamell-Küche recipe (which OMFG my phone just AUTOCORRECTED TO THE STORE NAME ???) but I found one on AllRecipes called “My Amish Friend’s Caramel Recipe” and it was legit! ⁣ ⁣ THOUGH: if you have one you prefer, lemme know! brown sugar is on my “omfg when we can finally go back to the grocery store” list so I’ll hopefully be making more soon ?⁣ ⁣ will link to all this in my stories (and just wish I had a little wax bag to eat it out of like I’m back in Florida!!)

Fans of classic Disney animation should be following the @mary_blair_color_theory account. The Instagram profile owner is cataloging all of Mary’s work, from childhood through her days with Walt Disney Animation Studios.

We especially love this concept painting for the Mad Tea Party from Alice in Wonderland! This little known Disney Instagram account is an aesthetic treat.

@theletterveee, owned by Instagram user Vy, is a bright, happy page that is sure to make you smile! Vy shares everything from pictures with Disney characters to Disneyland Resort planning tips.

She also has super cute Disney day outfits and accessories!

It’s a rainy Disney day! ☔️? And I’m a happy guuurl! ? [So we gonna ignore the fact that my umbrella clashes with my outfit ?] • ?: @dizfeed #CaliforniaAdventure ? #DCA ?

@dizcartel is the self-proclaimed home of “The Addictive Side of Disney.” The account owner shares some of the most stunning Disney Parks photos we’ve ever seen, making this a great Disney Instagram to follow on days you’re especially missing WDW and DLR.

So if you could take a friend to Disney’s Animal Kingdom right now to catch a look at the Tree of Life? Who would it be? ???°o° #DisneyCartel #Disney #DisneyParks #DisneyGram #avatar #world #WDW #MickeyMouse #WaltDisney #DisneyAP #DisneyPassport #castmember #disneyinsta #animalkingdom #treeoflife #disneytravel #aroundtheworld #travel #HappiestPlaceOnEarth #riversoflight #flight #flightofpassage #WaltDisneyWorld