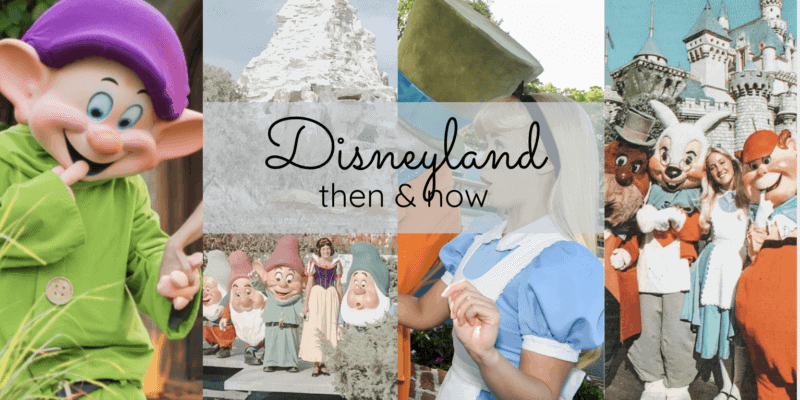 A proud Disney history buff, I love looking at pictures of Disneyland when Walt Disney was still at the helm of the first Disney theme park. Instagram account @disneyland.retro is a super cool space where vintage photos of the Anaheim park are shared daily.

One of the most interesting things about the account is getting a glimpse of what Disney Parks characters looked like then and now. Here, we’re going to board a virtual time machine, of sorts, and take a trip back in time to see how Disneyland’s character costumes have transformed.

This image throws into sharp relief how much Mickey has changed in three decades, but the Star Wars droids have remained identical to George Lucas’s original concept (check out a modern R2-D2 gliding around Batuu below).

Snow White and the Seven Dwarfs have remained relatively true to their original 1937 look through the years. In this retro image below, we see Snow and all seven of the little miners posing in front of the Matterhorn.

In the modern image, Snow’s dress has gotten more elaborate (and her sleeves have changed color!) and Dopey’s mask and costume have gotten a 21st century update. We think today’s Dopey looks more like the movie character. Tell us your thoughts in the comments!

This image of vintage Disneyland Alice, Tweeldee, Tweedledum, the White Rabbit, and the now-defunct Walrus character not only shows how much costumes have changed, but Sleeping Beauty Castle too! The castle now boasts a pink and royal blue color scheme that has transformed it completely.

This profile view of the original Minnie Mouse Disneyland character costume shows just how different some of Disney’s most beloved icons used to look in the parks!

The actress portraying Minnie didn’t wear her iconic bow and only wore an oversized mask instead of today’s full-body costume. We think the modern Disneyland Minnie Mouse is much more approachable. What are your thoughts on the original costume?

We hope you’ve enjoyed this trip down Disneyland memory lane. Don’t forget to tell us what you think about these retro Disney Parks character costumes!

Comments Off on Blast From the Past: Vintage Disney Park Characters Then & Now!