Disneyland TikToker Allegedly Screams Vulgarities at Other Guests - Inside the Magic 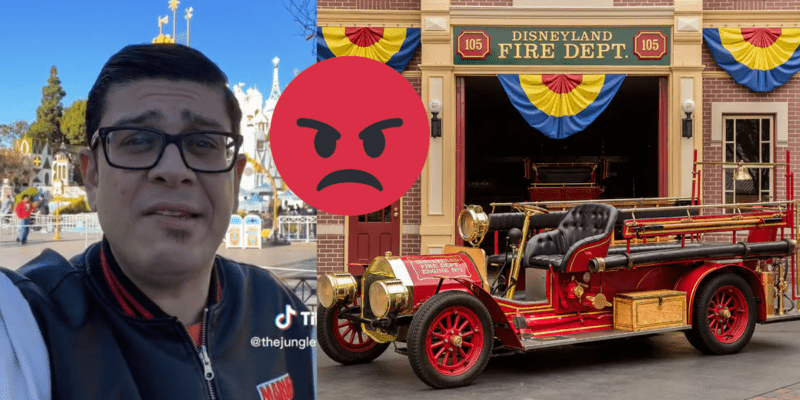 For Disney Parks fans that can’t regularly visit Disneyland, TikTok can be a great way to replicate that experience. However, it’s caused much controversy in the past year as live streamers, vloggers, and TikTokers regularly disrupt other Guests. One even got a Disney Cast Member fired for speaking negatively about her.

Most recently, TikToker @thejungleskipper (who boasts 157,000 followers) is accused of yelling nasty things at other Guests to get them away from a Disneyland Park attraction. Reddit user u/unique-butterfly02 posted about the live stream as, unlike YouTube, TikTok live videos aren’t saved.

“Just witnessed a tik tok streamer go onto the fire truck at night and sing obnoxiously loud so that other guests would leave the fire truck,” they wrote. “Apparently he does it every stream and does an inspirational talk on the truck. He waited about 5 minutes and yelled obnoxiously loud about diarrhea so that he could have the truck to himself.”

The fan said it “takes the pure magic” out of the Disney Parks. “I even commented about how it was rude and everyone in the live disagreed.”

“The streamers are there every day and get to experience the same thing over and over,” the fan continued. “What if the other guests in the truck were there for the first time? And that’s the experience they get? They are very annoying and disrespectful to other guests.”

The post received hundreds of votes of support and thousands of comments agreeing with the original poster. “Stuff like this will end up with Disney banning all livestreaming in the park,” u/MikeHoncho2568 wrote. “The person should be trespassed for this.

What do you think of live streaming at Disneyland Park, Disney California Adventure, and Downtown Disney?