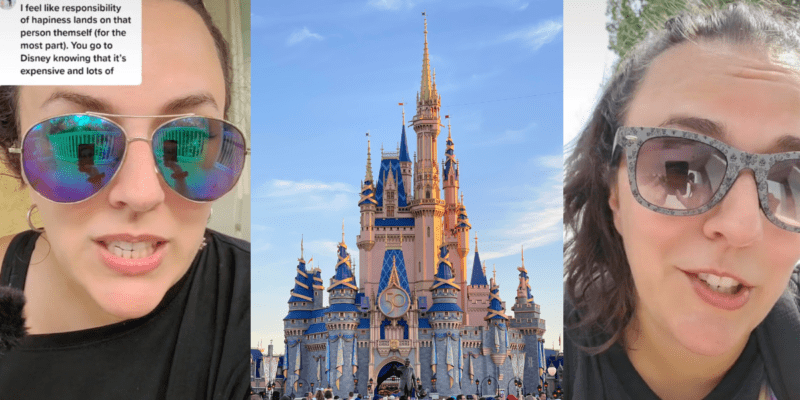 A Disney influencer has received a bit of pushback from followers after alleging that the real “magic” is missing from Walt Disney World Resort because The Walt Disney Company isn’t providing enough for its Guests, not because influencers are encouraging “hacks” and “tips” that make it harder to get “magic.”

“Disney Adults” and Disney Influencers have been the target of intense backlash on social media over the past few months. Sometimes, it’s been for something as innocuous as crying while hugging Pluto at EPCOT. But in another incident, fans petitioned to ban two Disney influencers from Disneyland Resort in June after they allegedly admitted to going to a Disney Park while sick. They later showed negative COVID-19 tests.

Many Disney Parks fans feel that social media has “ruined” Disneyland and Walt Disney World Resort, making once-secret spots crowded. Others have forced policy changes at the Parks after encouraging Guests to get “dress-coded” for a free tee shirt.  Just lack week, an influencer suggested permanently damaging 3D glasses at the Disney Parks to make them fit better.

@2foolishmortals shared a video from EPCOT talking about Disney fans who claim the “magic” is gone due to other Guests “ruining it” for other people:

we’ve been talking about #DisneyMagic and there have been lots of interesting comments, but I have some questions. Share your thoughts! #distok #disneyworld #themeparks #Wdw #Disney #epcot #magicalmoment

“Let’s assume that you firmly believe that you shouldn’t ask for Cast Members anything. We wouldn’t run into this problem if people weren’t doing what I’m doing right now, if people weren’t creators, if they weren’t influencers, or whatever,” she says in the video. “You have to acknowledge that this stuff existed before that.”

She also feels that magic can be so many different things and it’s “sketch” to say others are ruining the magic when everyone has a different definition of the term. “Suggesting that an influencer might be responsible for that is silly to me,” she argues.

One commenter suggested that the definition of magic is when you go home from your Walt Disney World Resort vacation feeling happier than you do frustrated. She agreed and posted a follow-up video:

“Unfortunately, at least here at Walt Disney World, there seems to be a really good chance that you’re going to be more frustrated than happy at the end of your trip,” she explains. “…We can get into the specifics about how it might be the price or the weather or the people or the Cast Members, or whatever it is. There are things that contribute to a bigger problem of ending up frustrated at the end of your trip.”

She says there isn’t just one thing ruining people’s vacations, but a combination of little things. Specifically, she argues that the lack of benches and places to sit for a meal leads to intense frustration:

“It’s not like, just the price. It’s the price, the lack of benches, the lack of air conditioning, the list goes on. Frankly, I think it’s kind of ridiculous that a company that knows the distance they need to put between trash cans so that people don’t throw their trash on the ground or exactly the right color to paint a building so that it blends in with the sky doesn’t recognize that not having benches is going to be a problem. Or how air conditioning is going to directly impact the attitude of Guests who are coming in to get some relief from that summer heat and also impact the attitude of Cast Members who are fanning themselves off behind counters while inside. When enough of these tiny, seemingly insignificant things build up, it leads to problems. Problems lead to frustration. Frustration leads to more problems. And it’s this continuing cycle that could be resolved by doing things like adding benches to C-Base Alpha. These are things that – how are you not doing it?”

One Disney Parks fan commented that if you are frustrated about seating and benches, you’re “not doing Disney correctly.” She replied with another video:

“I’m not going to go into an exhaustive list on all the things that contribute to frustration for some Guests… But I do take a little bit of issue with saying that you’re not doing Disney ‘correctly’ if you’re frustrated that you’re eating your food while balancing it on a banister, for example, like we did the other day, especially if that’s a reoccurring theme,” she explains. “Or that you’re not doing Disney correctly because you are frustrated that you couldn’t find a bench to sit on so that you could catch your breath.”

The Disney Parks fan says she’s not trying to be “an *ss,” but feels that others should consider how their words affect Guests who need access to more shade, benches, and seating. She explains with one more video in response to someone who argued that happiness is what you make it at the Parks:

Replying to @familywanderings I have more to say than I can fit in 3 min, so hang in there with me. 😀 but I agree to a point. I just think that there are limits to what happiness you can create on your own. The question is, where is the line? 🤷‍♀️ #distok #disney #themeparks #vacationplanning #waltdisneyworld #wdw

She says she mostly agrees that it’s up to individual Guests to have a good attitude and make the most out of their Disney vacation, but that Disney isn’t providing enough for them to do that.

“When I talk about where I think Disney is dropping the ball in scenarios like this, what I’m talking about are things that there’s no way you could’ve expected as a Guest coming in,” she says. “As a Guest, when you mobile order and you have to pick a window for when you’re going to go pick up your food, and you go to that counter service location, and you pick up food for your family, I think it’s a fair expectation that there’s a place for you to sit and eat that food, especially if you are ordering from a [counter service] restaurant that has seating. That’s simply not the case right now.”

“At what point does Disney become responsible for the actions that they’re making? If you want to sell more food, make sure there is enough seating open,” she argues.

The Disney fan also points out that if Disney wants more Guests in shops and attractions, those shops and rides need to be open and functional, which they recently haven’t been.

“I do think that you need to have a good attitude, and you are responsible for your happiness when it comes to having a good attitude. But I think that Disney needs to provide some basic necessities for their Guests, and right now they’re not.”