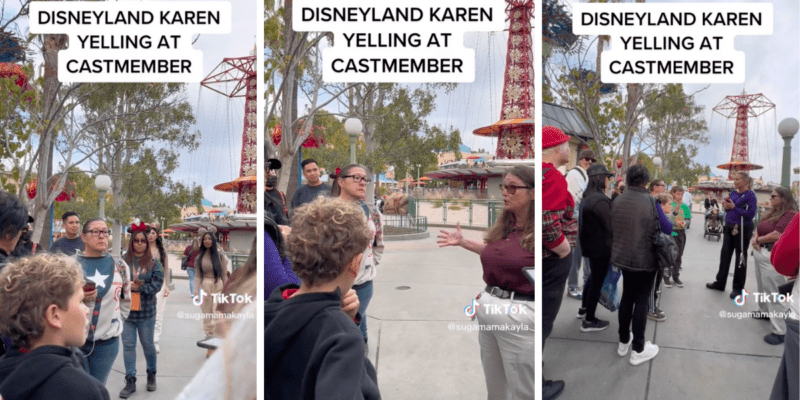 It’s a confusing time to be a Magic Key holder as block-out dates and Park Reservations continue to make visiting Disneyland Park and Disney California Adventure more difficult.  Passes sold out the second they went on sale earlier this year, even after former Disney CEO Bob Chapek referred to the Annual Passholders as “unfavorable” Guests.

Some Magic Key holders even have an ongoing lawsuit against Disneyland Resort, alleging that the Disney Park inaccurately advertised the program and how Park Pass Reservations would be distributed.

But this week, some Magic Key holders had a different bone to pick with Disneyland Resort. From December 5 to December 20, Magic Key holders could pick up a free holiday tote bag by the Silly Symphony Swings at Disney California Adventure from 1:00 p.m. to 5:00 p.m. daily. However, as exclusive merchandise items often do, these bags ran out early.

A group of Guests approached Disney Cast Members 30 minutes before the pick-up time ended, looking for the bag, but they were all gone. Things went south quickly, and one of the Guests (@sugamamakayla) pulled out her camera to film a “Disney Karen” yelling at the employees about the bag:

At times, it’s hard to understand what’s being said in the video because it was taken outside in a busy Disney California Adventure. But a Disney Cast Member can be heard saying, “I really do apologize, folks,” to a group of angry-looking Guests.

The Guest, referred to as “Karen,” repeatedly asks the Cast Member how many Magic Key holders were in the Park that day and how they keep track. Still, she explains that she’s a Guest Service Manager for a nearby attraction and had no control over the tote bag distribution. The Guest then demands she give them Lightning Lane passes for the inconvenience, but she explains that she can’t.

“What kind of Guest Services Manager doesn’t want to please the customers?” the Guest asks.

“I do want to please the customers. I just have so many of them; it’s not something that’s in my control,” the Cast Member responds. She repeatedly tries to explain why she can’t give them a Lightning Lane, but they continue to demand it.

Later in the video, a Disney Leader (what Disney calls higher-up managers) approaches. The Guest asks if the situation is in the Leader’s control. “Somebody here must have access to give to all these customers who are frustrated…. We all left where we were to come over here and get [the tote bag],” the Guest says.

“We’ve got other people who unfortunately haven’t gotten their bags either,” the Cast Member explains. She suggests they follow up with Guest Services to find out how Disneyland Resort plans to distribute bags in the future.

Unfortunately, the Guest continues to berate her and call her “useless.” At this point, the Leader steps in. She apologizes to the Guests but says the bags were “while supplies last” and ran out sooner than anticipated.

Thousands of Disney Parks fans and Cast Members praised the employees for their tact. “She’s my manager!! I’m so proud of her for standing her ground !!” wrote @yannibraca.

“Do they not understand ‘first come first serve?’” asked @not.andrew.

“SMH. Then they ruin it for all us other magic key holders,” said @brennyg6.

Disneyland Resort hasn’t commented on this incident. Please be kind to Disney Cast Members as they do their best to help you have a magical visit.

How do you think the Cast Members handled this situation?