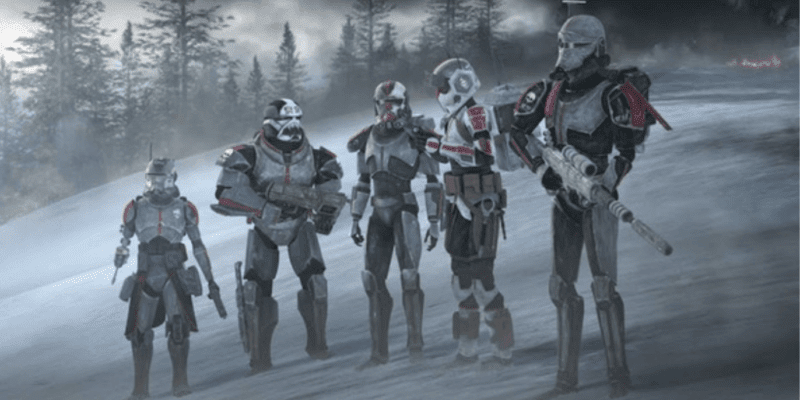 Last year, Star Wars fans were treated to a new animated entry into the expanding canon — Star Wars: The Bad Batch. From Lucasfilm creative Dave Filoni, the mind involved in various projects like Star Wars: The Clone Wars, Star Wars Rebels, and Star Wars Resistance, The Bad Batch re-introduced the team of experimental clones, Clone Force 99, as they navigated the rise of the Galactic Empire and the execution of Order 66.

Meeting new characters along the way, and encountering some old faces, The Bad Batch became a hit with fans, and with the sophomore season just over two months away, here’s everything we know about The Bad Batch Season 2.

What is Star Wars: The Bad Batch?

Star Wars: The Bad Batch is an animated television series consisting of 16 episodes based on George Lucas’s Star Wars. Airing on Disney+, the series began with a feature-length premiere (“Aftermath”) on Star Wars Day (May 4, 2021), followed by a second episode on May 7, and then weekly entries coming each Friday thereafter.

The Star Wars animated series was created by Dave Filoni, and developed by him and Jennifer Corbett, with Brad Rau acting as supervising director. Executive producers for the project were Filoni, Corbett, Rau, and Athena Yvette Portillo, and it was produced by Josh Rimes.

When is Star Wars: The Bad Batch set?

Filoni’s series acts as both a sequel and a spinoff to Star Wars: The Clones Wars and directly crosses over with Star Wars: Episode III — Revenge of the Sith (2005), The Bad Batch follows the genetically-enhanced clones on a series of daring mercenary missions as they traverse a galaxy that wants them dead following the execution of Order 66, and their subsequent defection from the Empire. The events, therefore, take place circa 19 BBY (Before the Battle of Yavin) with the clone army transitioning from serving the Republic to serving the Galactic Empire.

Who is in the cast of Star Wars: The Bad Batch?

How did Star Wars: The Bad Batch Season 1 end?

The last episode of The Bad Batch Season 1 was called “Kamino Lost” and featured the aftermath of the shocking destruction of Tipoca City on Kamino. The cloning facility was first introduced into the Skywalker Saga in Star Wars: Episode II — Attack of the Clones (2002), and 19 years later, Lucasfilm put its end on screen much to the emotional distress of Omega, and fans alike.

After Crosshair decides to part ways with his former comrades, even after confirming his inhibitor chip has been removed (because “good soldiers follow orders”), The Bad Batch reveals that the Empire has transported Nala Se to the secretive Mount Tantiss, which, if Star Wars Legends history is anything to go by, is both directly linked to Emperor Sheev Palpatine’s cloning program and Imperial mastermind, Grand Admiral Thrawn. The latter of which is expected to make his transition to live-action in next year’s Ahsoka starring Rosario Dawson.

When is Star Wars: The Bad Batch Season 2 airing on Disney+?

After multiple reshuffles on the Lucasfilm calendar, The Bad Batch Season 2 will now release with a two-episode event on January 4, 2023, followed by weekly episodes for the rest of the 16-episode season. It will air exclusively on Disney+.

What could happen in The Bad Batch Season 2?

While the plot is under wraps, chances are that The Bad Batch will continue in the same timeline as the first season, but as Jennifer Corbett said at this year’s Star Wars Celebration Anaheim, “some time has passed since season one” of the TV show.

But, with an appearance by Cad Bane in the live-action The Book of Boba Fett, and the arrival of his sister, Omega, (someone Bane was after in The Bad Batch) could be too much of a coincidence to be a coincidence. It could also be a way to pave the crossroads of Boba Fett meeting his future associate, the mercenary Fennec Shand, who first teamed up in the second season of Jon Favreau’s The Mandalorian.

Then there’s the mystery behind the Imperial facility on Weyland/Wayland — Mount Tantiss — and just what the Kaminoan Nala Se is doing there. TechRadar noted:

“Where Nala Se is, what Nala Se is doing, should be a mystery to the audience,” Corbett told StarWars.com, “and we hope to explore that in the upcoming season.”

Mount Tantiss first appeared in Timothy Zahn’s “Heir to the Empire” (1991), with the Legends continuity revealing the facility to be home to Emperor Palpatine’s storehouses which included Spaarti cloning units. As we know from the sequel trilogy, Palpatine used cloning to stay alive, including creating the Force-user Supreme Leader Snoke (Andy Serkis), so The Bad Batch Season 2 could continue laying the foundation for the future events in the galaxy far, far away.

Is there a trailer for Star Wars: The Bad Batch Season 2?

Yes! And you can watch it here!

Are you looking forward to seeing Star Wars: The Bad Batch Season 2? Let us know in the comments down below!