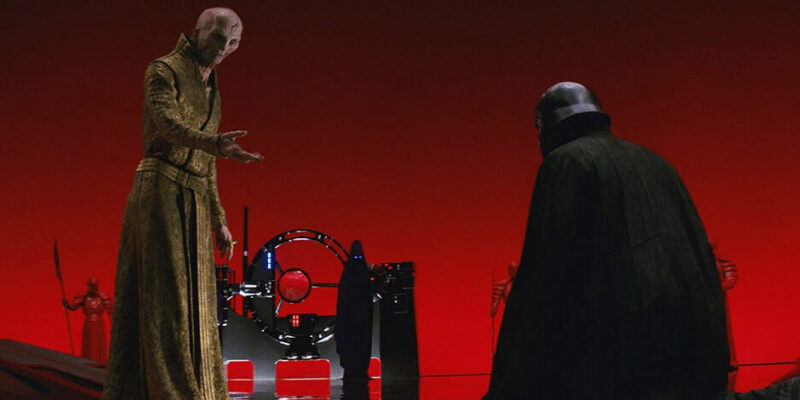 Star Wars: Andor continues to capture audiences with a weekly dose of good vs. evil, rebels vs. Empire — but is anyone actually good or bad in this carefully constructed drama? It seems not.

In fact, the latest episode, Episode 8 “Narkina 5”, introduces fans of the galaxy far, far away to a host of new characters — and some old ones — including one world-renowned actor and director who just so happens to have been cast in the Star Wars universe once before.

Five weeks into the run of Lucasfilm’s latest live-action entry into the Star Wars Saga, Andor from Tony Gilroy is closing the gap between future Rebel spy Cassian Andor (Diego Luna) and the Galactic Empire, which is hot on his tail.

Over in Coruscant, Genevieve O’Reilly’s Mon Mothma is playing the long game, slowly feeding her political endeavors into loyal friends and spreading the web of the burgeoning Rebel Alliance. Then there’s Luthen Rael (Stellan Skarsgård), who is relishing in the more aggressive movement of his own exploits.

But after Andor is captured by shoretroopers on the beach planet, Niamos, the eponymous future savior of the galaxy is transported to a labor facility where he will carry out his sentence alongside others that have wronged the Empire. It is here that Andor meets Kino Loy, who as it happens is played by none other than Andy Serkis in the Star Wars show.

Serkis’s face may not have been in Star Wars before, but his acting has. The multi-franchise actor starred as Supreme Leader Snoke in Lucasfilm’s first trilogy outing under The Walt Disney Company.

Now, Serkis is back, except here he is Kino Loy, an inmate, and foreman of Unit Five-Two-D at the facility. The inmates are building equipment for the Empire — although it is not known just what it is yet. That hasn’t stopped some fans from speculating that Serkis’s arrival in Andor is not just to create a new character but to provide a Snoke origin story.

It wouldn’t be completely surprising: While set much earlier than Andor, The Bad Batch revealed Mount Tantiss, hinting at the Emperor’s cloning experiments (something that was revealed in Star Wars: Episode IX — The Rise of Skywalker (2019) on the planet Exegol) that will likely play into the second season of Dave Filoni’s animated follow-up to The Clone Wars.

While Snoke’s origin was teased in the final sequel trilogy movie, a more coherent timeline was revealed last year in Marc Sumerak’s “Secrets of the Sith” (2021). It said:

And, Serkis himself has referenced the fact he has been to the galaxy far, far away once before. Speaking to Vanity Fair, when asked about a Snoke origin story in the Star Wars series, the actor said:

“I know! It’s a difficult one because I’m sure that’s exactly what people will think. And why would they think other? I was a bit confused as to whether to do it or not, but it was purely because I love Rogue One. I truly loved the grounding of that film in a world which felt both real and yet still felt epic. Also, I’m getting to play a character at the opposite end of the spectrum of a highly powerful Supreme Leader. [Kino Loy] is someone who is a real person in this world.”

Still, it wouldn’t be unusual if Star Wars did utilize Andor as an opportunity to add more context to Palpatine’s cloning exploits. And fans certainly didn’t miss Serkis, and what his role could mean, in Andor this week.

Another question came from @leepunzel:

So, does anyone think Kino is a Snoke clone? Orthey [sic: Or they] just wanted Andy Serkis in another role? #StarWars #Andor

So, does anyone think Kino is a Snoke clone? Orthey just wanted Andy Serkis in another role? #StarWars #Andor pic.twitter.com/9VQWCGQtid

It really could go either way, timeline-bound or not, Star Wars has done strange things in the past. Or, this could just be a simple case of utilizing a popular and talented actor in a new role without the need for his trademark motion capture. Either way, Andor retains its status as the most compelling and interesting Star Wars live-action series.

What did you think of Andy Serkis’s appearance in Andor? Let us know in the comments down below!