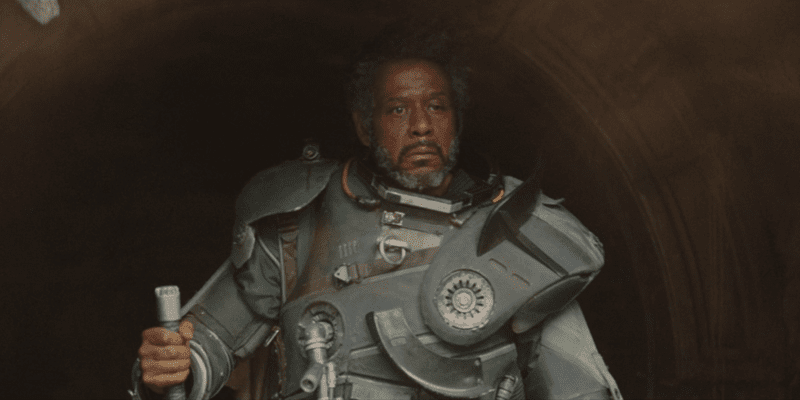 One of Star Wars‘s highly anticipated upcoming projects just confirmed another huge star. The 2022 series Andor is set to follow Diego Luna’s Cassian Andor, and it seems the cast just keeps getting better and better.

Andor was announced by Lucasfilm President Kathleen Kennedy alongside a multitude of other Star Wars projects at the end of the last year. The series will follow Luna’s character, who originally appeared in the Star Wars anthology film, Rogue One: A Star Wars Story (2016), with Felicity Jones (Jyn Erso), Ben Mendelsohn (Orsen Krennic), and Mads Mikkelsen (Galen Erso), among others. The film was directed by Gareth Edwards.

Rogue One became a surprising cult hit and introduced the world to a slate of new characters. It also provided the live-action Star Wars universe its first direct movie-to-movie connection. The ending saw the return of a young Princess Leia (Carrie Fisher) via de-aging CGI technology and Darth Vader, as it crossed over with the opening of George Lucas’s original Star Wars film, Star Wars: Episode IV – A New Hope (1977).

Another Star Wars character — whose journey first began in the animated series, The Clone Wars voiced by Andrew Kishino — also starred in Rogue One. Saw Gerrera made his live-action debut in the 2016 movie, played by Academy Award winner, Forest Whitaker.

The character originally appeared in Lucas’s and Dave Filoni’s The Clone Wars, where he and his sister, Steela Gerrera, meet the Star Wars Jedi Obi-Wan Kenobi, Anakin Skywalker, and Ahsoka Tano, who secretly train the burgeoning resistance, the Onderon rebels, in military combat. Whitaker did voice the character in Star Wars Rebels during Saw’s mission on the planet Geonosis which sees the Ghost crew sent to rescue him.

Whitaker’s Saw Gerrera in live-action was the leader of the Partisans — a rebel faction unaffiliated with the Rebel Alliance. After reuniting with his mentee, Jyn Erso, on the planet Jedha, Gerrera was killed just after giving Erso important information regarding the Galactic Empire’s Death Star. Star Wars fans following Dave Filoni’s new Disney+ show, The Bad Batch, will have also seen the future Rebel extremist in the premiere episode, “Aftermath”, which sees Admiral Tarkin order Clone Force 99 to eliminate him and his group of refugees.

Set five years before the events of Rogue One, Andor will offer fans a look at the formative years of the Rebellion, continuing the Star Wars franchise’s expansion into the gaps between its blockbuster movies. And now, new information has come to light that brings Forest Whitaker’s Saw Gerrera back into the Star Wars universe.

Speaking with Sverige Radio, Andor cast member Stellan Skarsgård — who is still in an undisclosed role — shared some news about acting with a certain actor. Via CBR:

Stellan Skarsgård teased that he will have some “juicy scenes” with Whitaker in Andor. He added that his character, whose identity is currently under-wraps, will share “at least two good” moments with Saw.

This is the first time fans will be hearing about Whitaker’s return to the galaxy. Whether Skarsgård has just accidentally leaked vital Lucasfilm information remains to be seen, but bringing Saw Gerrera back will certainly be intriguing and begs the question of whether he will return to Filoni’s The Bad Batch again, with the timelines narratively close.

Andor has been quietly ticking along. While the world watches The Bad Batch and gears up for more Mandalorian and The Book of Boba Fett news, Andor could be a surprising television hit, much like Rogue One was in the movie field. The series is even rumored to feature two major Jedi characters in the form of Obi-Wan Kenobi and Ahsoka Tano. Both characters will appear in their own self-titled Disney+ series, but there’s no saying that they can’t cross over into other series events.

With Andor‘s growing presence in the Lucasfilm sphere, the addition of Whitaker to its already impressive cast is sure to boost even more excitement for the new Star Wars spinoff.

Are you excited to see Saw Gerrera return to live-action?