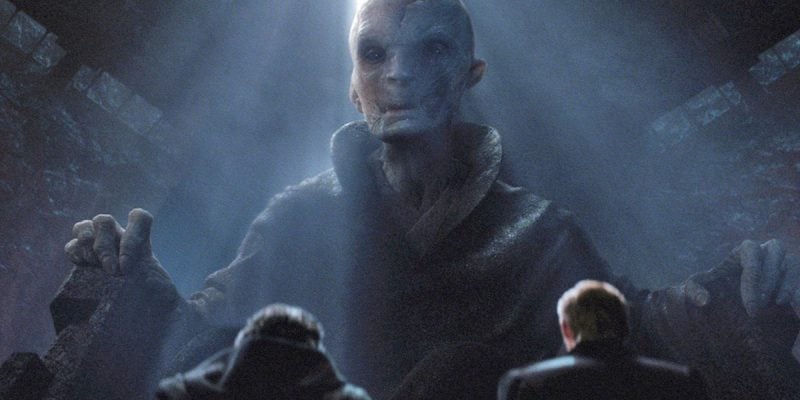 It has been almost two years since the finale to the Skywalker Saga, Star Wars: Episode IX — The Rise of Skywalker (2019), debuted in theaters. JJ Abrams’ movie, for some fans, further tarnished the reputation of the Star Wars franchise, leading to a call for a rewrite of the entire sequel trilogy.

While some praised the reprisal of the villain, Emperor Palpatine AKA Darth Sidious (Ian McDiarmid), others saw it as a complete U-turn on the sequel trilogy’s direction, especially after Rian Johnson’s Star Wars: Episode VIII — The Last Jedi (2017) killed off its antagonist, Supreme Leader Snoke. Now, Star Wars has given an in-depth account of Snoke’s origins. Finally.

It was Johnson’s sequel that flipped the franchise on its head after killing Snoke with a lightsaber and teaming up Ren and Rey (Daisy Ridley) in an impressive battle sequence. This shocking moment was just one of the polarizing parts of the sequel trilogy’s sophomore Star Wars movie.

The Star Wars galaxy hasn’t really been the same since. Projects like showrunner Jon Favreau’s and executive producer Dave Filoni’s The Mandalorian have started to stitch the fandom back together with new adventures happening somewhat separately from the franchise’s trilogies. One contentious part of the saga though is still the plot holes and retcons of The Rise of Skywalker.

Star Wars often uses multimedia to further explore and explain events in the movies. Just recently they announced a brand-new Luke Skywalker project set in between the events of Star Wars: Episode VI – Return of the Jedi (1983) and The Force Awakens which is said to include elements of the Sith Order and Exegol — the Sith hideaway prominently featured in The Rise of Skywalker where Palpatine was located.

Now, Star Wars has revealed a more detailed account of Palpatine’s cloning process on Exegol, the Sith Eternal, and how he managed to coordinate his return to power and control of the First Order. For context, it was only a few months ago that Star Wars quietly confirmed that Snoke was an “evil duplicate” of Palpatine for the first time in canon.

Star Wars fans can rejoice as more information has come to light surrounding this “duplicate” villain. Thanks to Jacob’s Quest (@JacobsQuest) on Twitter, who has shared excerpts of the new book Star Wars: Secrets of the Sith (2021), we now know the full origin story of Supreme Leader Snoke.

We can see from the information here, and straight from the source too as the Star Wars book, Secrets of the Sith is narrated by Palpatine himself, that Snoke was a “temporary measure at best”. The excerpt of part of Snoke’s backstory reads:

My new body’s deformities were severe. Unable to leave Exegol, I would have to spread my influence across the galaxy through less direct means. As part of their genetic experiments, my followers had attempted to create another being that came to be known as Snoke.

Palpatine’s declaration that Snoke was a “temporary measure” is sure to take on a rather meta meaning for Star Wars fans, as the sequel trilogy’s muddled storyline perfectly demonstrated what “temporary” means. Marc Sumerak’s Secrets of the Sith also recently gave fans their first canon look at Sheev Palpatine’s master, Darth Plagueis, in a new image featuring Darth Sidious and Darth Vader.

The section goes on to discuss Palpatine’s “son” and how this cloned subject eventually led him to the “Heir to the Empire”, his “granddaughter”, Rey. Many fans will know the outcome of Rey’s discovery of Palpatine, her Force Dyad with Ben Solo AKA Kylo Ren, and the reasoning behind her abandonment on the planet, Jakku. The conclusion was cluttered with unwarranted reveals but at least now, fans can rest easy knowing the full thought process behind the creation of Supreme Leader Snoke, at least from Palpatine’s perspective.

Ostensibly, Star Wars has been hinting at Palpatine’s survival and his cloning experiments in both The Mandalorian through the inclusion of Grogu AKA “Baby Yoda” and Dr. Pershing’s (Omid Abtahi) mysterious infatuation with him, and in Filoni’s The Bad Batch. The latter saw the Star Wars Legends location, Mount Tantiss, appear, which has ties Emperor Palpatine and to Grand Admiral Thrawn’s cloning program…

What do you think about this more comprehensive origin story for Supreme Leader Snoke? Let us know in the comments below!