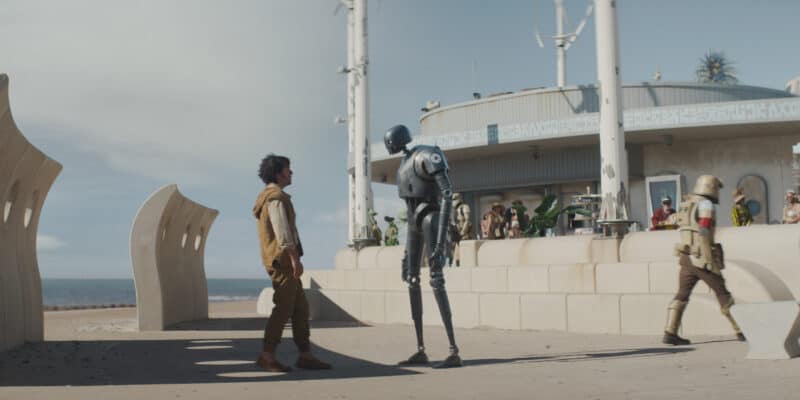 Was that? No, it couldn’t have been.

If you’ve seen the latest episode of Andor, then like the rest of us, you were probably left shook at the scene of Cassian Andor (Diego Luna) being sent to prison for a six-year sentence by a droid that looked suspiciously like his future reprogrammed companion, K-2SO (Alan Tudyk).

So, is that his future friend and Rebel Alliance ally? In short: most likely not, but it can’t be ruled out. K-2SO is part of the KX-series line of droids, manufactured to be intimidating, ruthless, and efficient in their defense of Imperial security. While K-2SO was the first time we saw this droid on the big screen in Gareth Edwards’ Rogue One: A Star Wars Story (2016), they were used throughout the galaxy during the Galactic Civil War. They’ve gone on to make an appearance in the videogame Jedi: Fallen Order, with Jedi on the run Cal Kestis encountering them during his own adventures, and across multiple other Star Wars books and comics.

That makes it no surprise that the KX-series were in deployment on the resort world of Niamos. Cassian encounters them after finding himself in the center of an Imperial pursuit, with the sandy-colored Shoretroopers chasing down what appears to be a group of thieves on the waterfront. Cassian, himself in hiding from the Empire, naturally looks suspicious as he sweats shiftily and attempts to dodge the authorities. But when he is apprehended, the Shoretrooper turns to his droid heavies to lend a hand. Asking a KX model to “Hang onto this one for me”, the droid takes the instruction quite literally. It lifts Cassian up into the air by his throat and holds him against the wall, while he gasps for air and tries to shout for help.

The next thing we know, Cassian is being sentenced by an Imperial bailiff for multiple crimes, including civil disruption; anti-Imperial speech; fleeing the scene of anti-Imperial activity; and attempted damage. Despite his protests of being just a tourist, he’s hit with a six-year sentence, and the last we see of him is being carried away to serve his fate.

As we know from Rogue One, at some point Cassian encounters a KX-series droid who he manages to reprogram and bring to the rebel cause. Andor should hopefully tell that story, with the show supposed to run all the way up to the events of the movie. Although as we know, Tudyk won’t be back to voice the acerbic and loveable droid.

Whether it is one of the KX models seen on Niamos or a future enforcer he is yet to encounter is still to be discovered. And as one fan speculated, it could be another Andor droid we’ve already met, B2EMO, who might unlock the clue to how he manages to turn such an intimidating Imperial asset to his advantage…

A theory from @marshalsvanth says:

I really think Cassian combines B2EMO’S consciousness with a KX droid and that’s how we get K2SO.

With Tony Gilroy behind the pen on both Rogue One and Andor, the latter would be the perfect place to bring the duo full circle.

What do you think? Is that K2-SO at the end of the latest Andor? Tell us in the comments below.

Andor (2022) is currently streaming on Disney+. Led by showrunner Tony Gilroy, it stars Diego Luna as Cassian Andor, Genevieve O’Reilly as Mon Mothma, Stellan Skarsgård as Luthen Rael, Fiona Shaw as Maarva Andor, Denise Gough as Dedra Meero and Kyle Soller as Syril Karn. Set before the events of Rogue One, in the years prior to Princess Leia’s fateful capture by Darth Vader, it follows the formation of the Rebel Alliance in the ever expanding Star Wars universe.