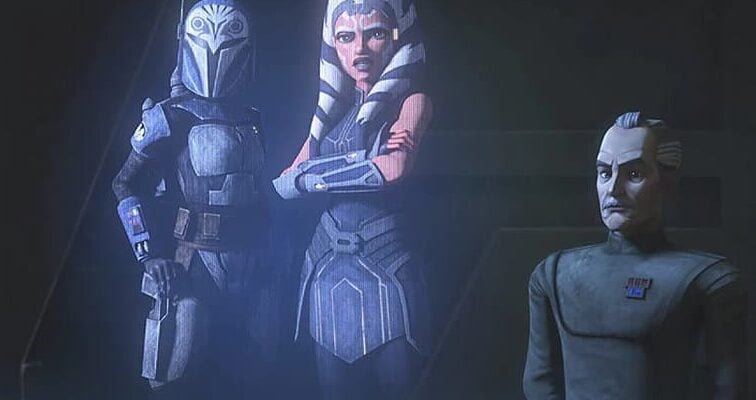 Tony Gilroy brings in a character that fans have grown to love who also appeared in The Clone Wars, Star Wars: Rebels, and even briefly appeared in Star Wars: Episode IV — A New Hope (1977).

In the opening scene of Episode 7, fans see an ISB official announcing how the Galactic Empire will move forward after the attack on Aldhani. Fans who don’t use closed captions may have missed that the speaker in the chamber was none other than Colonel Yularen. The same man fought alongside Anakin Skywalker and Obi-Wan Kenobi in the Clone Wars. He also took over the Imperial Security Bureau after the Fall of the Republic.

Yularen trained several ISB agents, such as Agent Kallus from Rebels, who later betrayed Yularen and Thrawn as he was Fulcrum sending messages to the Rebels. In A New Hope, Yularen was present on the Death Star when the different Moffs and Admiral met with Tarkin and Darth Vader.

The character has had a lot of his story fleshed out in several series, but since Andor focuses on the ISB, Yularen was destined to show up in the series, and his opening speech reveals just how angry the Empire is with Aldhani. Not only are planets facing harsher punishments and taxes, but the Empire is also making it clear that any rebel activity — or as described in the series as partisan activities — won’t be tolerated, and planets harboring individuals who defy the Empire will be punished.

Yularen even mentions that he discussed these plans with Emperor Palpatine and has his blessing to pursue the rebels on any front necessary. While Yularen’s screen time is only in that one scene, it doesn’t mean this will be the last time we will see him appear.

Related: ‘Star Wars’ Series Ruins One Scene With Too Much Subtlety

The Rebellion is just starting to grow, and the Empire is sure to retaliate with more countermeasures as more Rebel attacks happen. Yularen will probably appear several more times in the series, and it’s excellent that Andor allows characters that matter to appear and have minor roles when it fits the story.

Unlike other cameos, Yularen’s presence is a subtle nod to what other Star Wars creators have done and incorporates more of an interconnected world without doing it just for fan service. With Dedra now having jurisdiction over Ferrix, the series might focus less on the ISB headquarters and more on Ferrix as other shots from the trailer show her landing on the planet with Death Troopers.

Maarva (Fiona Shaw) will be resisting the Empire again, leaving fans to see Ferrix housing old Separatist officials or supporters who would help explain Cassian’s Separatist backstory that has been discarded for the moment.

With people beginning to act against the Empire, more citizens will attempt to fight to leave more dead and wounded as the Empire will be aggressive and callous in their actions. With the amount of firepower at the Empire’s disposal, there’s not a lot that the Rebels can do at this stage without military experience or having access to weapons.

Diego Luna’s Cassian still has to join the Rebel Alliance — which still needs to be formally created — as we know he will be a prominent supporter of the war against the Empire before Rogue One (2016) occurs. Surprisingly, there are five more episodes left in the episode, with plenty of major moments left to see before the season closes.

Did you notice that Colonel Yularen appeared in the episode? Do you think he will have another appearance in the series?

Star Wars may be about a galaxy far, far away, but it’s full of amazing stories and characters. Fortunately, those stories continue to be made as Lucasfilm promises to tell character-driven stories in Obi-Wan Kenobi, Andor, Ahsoka, The Acolyte, and of course, The Mandalorian.