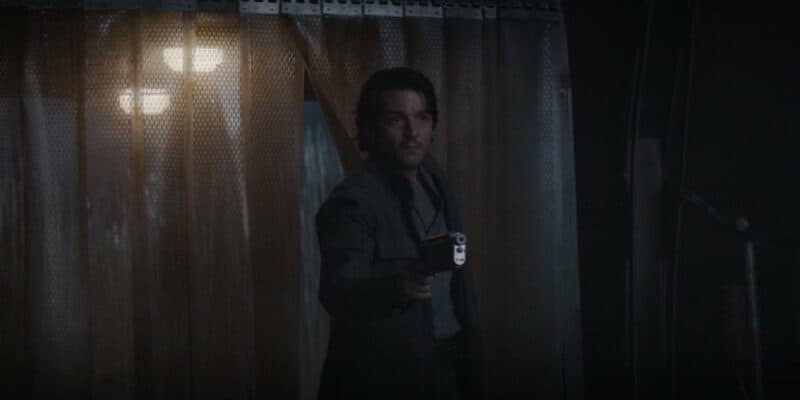 Not everything in Star Wars can be done with perfection, but one scene in Andor definitely failed to show an essential detail clearly for fans to understand.

Related: ‘Star Wars’ Series Scraps Normal Perspective On the Empire For One Scene

As Cassian and his fellow member try to steal all of the quarterly payroll, things don’t get as planned once the corporal realizes what happens. This leads to a classic shoot out and Vel gets trapped by heavy fire. Cassian is busy with Nemik dealing with their problems and getting the freighter ready for lift off.

Tamaryn sees his moment to help Vel and he asks Skeen to cover him. The man grimaces, but steps out to send out some supporting for a few seconds and then takes cover while Tamaryn bravely runs into the open. Once Skeen stops firing, the imperials kill Tamaryn right in front of Vel.

Most fans would instantly see this death as useless and not well executed, but the end of the episode reveals a major point. Skeen lied to the cell about his past and actually planned to take the money for himself. His hostility to Cassian is actually him evaluating if he is a threat to him and that’s why he offers him to split the money half and half and go their own ways.

Cassian kills him immediately, but Skeen’s action with taking cover make more sense once you rewatch the scene, but Andor was too subtle in showing Skeen’s uneasiness to help his friends. Skeen does show a lot of compassion to Nemik and wants him to get medical attention, but now this seems like his plan to have an easier time to hijack the money.

Since no one notices that Skeen doesn’t fulfill his promise to Tamaryn, his actions aren’t made apparent to the audience with all of the tense back and forth action. That scene on a second rewatch are very obvious because the viewer has been made aware of Skeen’s motivations, but that shouldn’t require fans to rewatch the episode to fully understand Tamaryn’s death.

If Skeen’s action were focused on a bit more, it would be easier to understand that the character’s intention might be suspicious and make his revelation at the end more believable. This would also make Tamaryn’s death better because it’s the sign that the rebel cell has already fallen apart and they just don’t see it.

Andor has done a great job at creating complex character, but not every character needs to have such subtlety for fans to enjoy. Sometimes it’s good to have some dramatized action to help fans quickly understand a certain change in character.

Skeen’s ending felt like a twist that should’ve been expanded on since the show focused so heavily on Andor’s mysterious purpose and the distrust for him being a mercenary, it felt like the show could’ve used some more time to set up Skeen’s actions so that he appears to be more suspicious than just a paranoid guy ready to kill Andor.

Most fans won’t catch the nuances and with a show as complex and rich as Andor that’s okay for some moments, but not for major story beats. There’s still half a season left so this could be a singular mistake or it could be a recurrent pattern.

Do you agree that Skeen’s actions were too subtle? Let us know your thoughts!